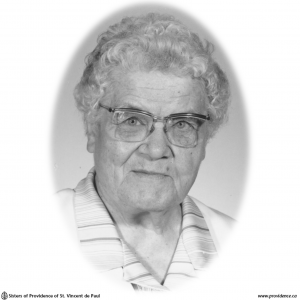 Beatrice McGuire was born in Strathcona, Ontario, on June 23, 1908. She was the middle child of a family of nine to be born to James Patrick McGuire and his wife, Mary Agnes (Kennedy). This family of five boys and four girls lived in a big, white limestone farm house which had no electricity or running water. There were oil lamps, and a hand water pump. There was a cook house containing a fine old cast iron wood burning stove. Great meals, pies, cakes and cookies came forth from its oven and there was no bothering to measure the rich homemade butter and cream which made all these delights so yummy. The McGuire children stepped out of their house into a large garden of fine healthy vegetables and fruits. To hear Sister reminisce one could almost smell the freshly cut cucumbers and tomatoes blending with the scent of fresh apple pies. There was also a fresh flowing stream behind their home where they caught so many delicious fish that some always had to be stored in the ice house. There was also a hen house, a milk house, and of course, and outhouse on the property. The big red barn was home to the hand-milked Holstein cows, as well as several horses. It can be surmised that everyone in the family worked hard, but that they also enjoyed life. Many old Irish melodies were enjoyed on the pump organ which dominated the family living room. Down the road was the one room school where Beatrice and her siblings began their formal education. Later Beatrice attended Peterborough Normal School and received her first class permanent teaching certificate in 1927.

Beatrice loved her chosen profession and was an excellent teacher who took an active interest in all aspects of her pupil’s lives. She often joined them in their sports activities and was a fine softball player. Still, Beatrice felt that God was calling her to something more, and so in 1932 she entered the Novitiate of the Sisters of Providence in Kingston. Beatrice pronounced her first vows in August 1934 taking the name of Sister Mary Avita.

Sister Mary Avita continued to dedicate her life to teaching and became the embodiment of separate school education in Eastern Ontario, especially in Belleville, where she spent most of her forty-three in the classroom. Her former students remember her as very strict but fair, and also as one who enjoyed a good joke. Mathematics and grammar were her favourite subjects. Sister also trained altar boys and visited the sick during her spare time. In 1952 Sister had to begin to wear a brace because of a back injury, but she continued to teach until 1974, at which time she retired but remained in Belleville. Sister Mary Avita continued to help others by visiting seniors and shut-ins. She was the only woman in Belleville General Hospital’s first Pastoral Care Team which had a membership of twenty-five. When her eyesight deteriorated so that she could not longer drive, Sister Mary Avita continued to minister by phone. When Msgr. J.P. Sullivan suffered a stroke, it was Sister Mary Avita who tirelessly helped him to regain his speech. In 1988 failing health finally forced Sister to move to the Motherhouse in Kingston.

All her life Sister Mary Avita retained her love of everything Irish, and her love of nature especially of trees. She was also a woman of prayer and could often be seen with her rosary in her hands. At her wake there were many touching and humorous stories shared about Sister by her former students, friends, and Sisters, several of whom were her former pupils. All confirmed that Sister had a great and positive influence on their lives. It was, perhaps, the first time a wake in the Providence Motherhouse ended with everyone singing, “When Irish Eyes Were Smiling,” which was followed by a loud and long applause.

Sister Mary Avita died on January 10, 1996, in the 64th year of her religious life. Her only surviving sister, Betty (Mrs. J. Lye) was unable to attend the funeral because she was ill in a nursing home in Belleville. Most of her nieces and nephews lived a long distance away, but nevertheless, the Chapel was full on January 12 for her funeral liturgy. Rev. Kenneth Stitt accompanied by several priests, presided at the Funeral Mass and delivered the homily. He remembered Sister Mary Avita as the sweetheart of the Pastoral Care Team in Belleville. He said that her students will rise up and sing her glory at the gates of Heaven. Many people are living richer lives because of the influence of Sister Mary Avita. Sister’s life was a clear sign that she chose to be a witness, even if unspoken of the Lord, day in and day out. Father Stitt ended his remarks very appropriately by adapting the words of one of Sister Mary Avita’s favourite songs to the occasion, “Oh, Sister dear, the pipes, the pipes are calling. Tis you must go and we must bide.”