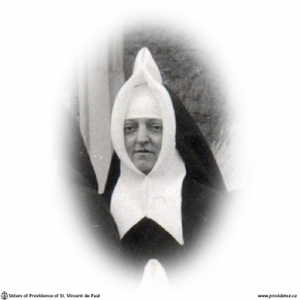 Sister Mary Barbara, after a lengthy illness, died in the Marian Infirmary on Thursday, August 8th, 1963. Sister came as a patient to the Infirmary in April 1955, and at that time was transferred from St. Vincent de Paul Hospital, Brockville, where she had been in all-health for a number of years.

Alice Rose Turley was born in Belleville, Ont., daughter of the late Joseph Turley and Alice Cummins. Before coming to the Novitiate Miss Turley had trained as a nurse, and was a graduate of the then Nursing School of St. Vincent de Paul Hospital. After her graduation she continued her nursing duties for some time at St. Vincent’s, and then joined the nursing staff of Providence Hospital, Moose Jaw, Sask. She finally decided to apply for admission to the Community, and was admitted as a Postulant on February 2nd, 1920.

After two years Novitiate Sister M. Barbara pronounced temporary vows, and in 1925 she was admitted to final profession. She was then appointed to the nursing staff of Providence Hospital, Moose Jaw, and also spent some time in Providence Hospital, Daysland. On account of delicate health, Sister M. Barbara returned to Brockville in 1950, and remained at St. Vincent’s until she came to Kingston, and has since been a patient at the Mother House Infirmary, Heathfield. Here she spent the last eight years of her religious life, and we believe Sister made good use of her trying illness, and long preparation for death.