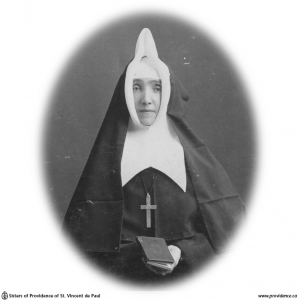 Picton, Ont., was the birth place of the cherished Sister whose brief memoir we undertake to record for the edification of the members of this Institute, wherein she religiously spent nine years.

Born Oct. 17, 1861, of respectable Catholic parents, more pious than wealthy, and who rejoiced that Almighty God had early infused into the innocent young heart of their daughter Catherine, a hatred for the world and a resolution to live for Him alone.

Even when a child she accustomed herself to prayer and pious works and loved to retire into solitude. She was exceedingly modest and the least indelicacy of word or action was hateful to her chaste mind. In the neighbourhood and schoolroom her mildness and devotion inspired her companions with a love of piety.

The ill health of her father and other family embarrassments detained our good Sister in the world until the age of twenty-four years. Filled with a strong faith and great fervour, Miss Casey entered the Novitiate on the Feast of the Exaltation of the Holy Cross, 1885, and during her Novitiate she studiously profited by all the religious privileges of that delightful monastic retreat. Reception to the white veil and holy habit Dec. 13, 1886 enlarged and strengthened a deeply religious spirit, which had been early instilled in her home life, by a saintly Mother.

Like her companions, our Sister Novices fulfilled all the duties exacted by obedience, with fidelity and good-will; but her character, which was already formed and bore evidences of a strong will, was bereft of that spirit of condescension, cordiality and cheerfulness which may be termed the treasure and key-note of every happy Novice. Being of a serious and reticent cast of mind, she preferred retirement on every occasion and when obliged to take part in some innocent or relaxing amusement, sadness was often vividly depicted on her countenance. At time she complained bitterly of coldness and insensibility in her devotions, a cross which our Lord added to her many others, but far more torturing to her delicate conscience than any outward trial. “As gold inn the furnace hath God tried His elect.”

At religious profession, which took place Aug. 1, 1888, the name of Sister Mary Beatrice was asked for and readily granted. She pronounced her vows with the fervour of one, who fully appreciated the grace of her religious vocation. For a short period the paths of perfection she had resolved to pursue, became smoother, and she exulted in the hope of now following her Divine Spouse more closely, living in Him, by a life of prayer and recollection, labouring for Him, with greater purity of intention, by the faithful observance of her holy rule.

Lacking in activity and zeal for the works of charity, together with a delicate constitution and a timorous conscience she was seldom engaged in the more laborious duties among the poor and sick. Still her modesty and unaffected gravity in fulfilling those assigned, rendered her a model to her companions, and a consolation to her Superiors. She was chiefly employed where her services were most valuable, viz., sewing, Chapel, refectory, etc. It cannot be said of her that she was a proficient in any particular work, I other words, she had no forte, but her life picture shows us, that her perfection consisted in performing common duties with uncommon fervour.

Two years of her religious life were spent in missionary labours at St. Vincent de Paul Hospital, and Mt. St. Vincent, Holyoke, and it well deserves mention that Sister Mary Beatrice was one of the loyal subjects, who remained faithful in the Mother House at the time of separation in 1892, and heroically aided her parent house by her inflexible fidelity to honour, virtue and truth.

As the cross is God’s happy instrument in forming Saints He employed trials and overwhelming temptations to purify still more, this devout young religious. Trials, indeed, she had in abundance, domestic anxieties, aridity of spirit and temptations against holy obedience. In consequence of bodily languor and debility from which she suffered towards the close of her life, she became more sensitive and exacting, which weakness was often very disquieting and every humbling to our good Sister. As religious we all stand on Calvary, but some are nearer than others to the Cross. Devotion to Jesus in the Adorable Sacrament of the Altar was her chief mainstay, her greatest comfort and her dearest treasure in all these tribulations. She implicitly followed the advice of her director and Superiors, and invariably derived much consolation from their salutary counsels.

While fulfilling the office of sacristan at St. Mary’s Cathedral, in Dec. 1895 a severe cold was contracted from which she never fully recovered. A slight attack of haemorrhage at one of our recreations warned the Community the consumption had elapsed in its fatal embrace, the slender form of our dear Sister. She feared death as an awful transit from this dim world to the great bright throne of God; but with heroic resignation and loving confidence in the promises of Him who said: “I am the Resurrection and the Life,” she calmly awaited the summons of her eternal Spouse to heaven. She lived but one year from this date and the greater part of that time. She always loved silence and now more than ever she ardently desired to become closely united was passed in the Infirmary, where she received all the services that loving hands could bestow to God in prayer and solitude. Her religious career was short, and at the age of thirty-five years, Dec. 3, 1896, the death summons came and the book of her pure young life closed forever!

Ah, may the life, virtues, sufferings and even the imperfections of this pious religious serve as so many voices, begging the charity of our golden prayers for the sweet repose of a dear Sister who suffered and laboured with us.

The solemn High Mass of Requiem was sung instead of the usual Exposition on the First Friday of the month and while gazing on the face of ineffable peace, no doubt could arise that Sister Mary Beatrice was not in heaven. At least for her, we trust the waiting will be short, she lived for God and died in His grace and love, wearing on her still features the calm beauty born of a holy life and a holy death.