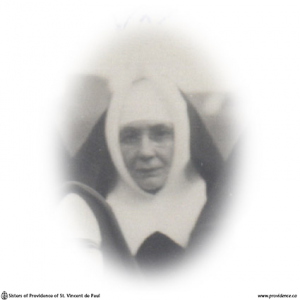 Sister Mary Benita, a patient at the Marian Infirmary, Heathfield, for the past two years suffered a fractured hip in a fall on Wednesday, July 10, 1963, and was taken immediately to the Hotel Dieu. Sister was up and around as usual and went to visit her sister the previous day at St. Mary’s of the Lake Hospital where she has been a patient for several months. The impact of the fall proved serious, as Sister suffered from shock and other complications, causing her much pain and distress. Although she gave hopeful outlook of improvement for awhile, she lapse into unconsciousness early on Saturday morning. Members of the Council called to see her that morning, and Mother Alban remained with her until she died that same afternoon at 3:30 p.m. Sister had already received the last rites of the church, and in her dying moments was visited by the Chaplain, while Sisters of the Hospital with Mother Alban and two of her nieces were at her bedside, as our dear little Sister M. Benita passed peacefully to her eternal Home.

Born in Liverpool, England, she came as a child with other orphans to the House of Providence Orphanage, where she was cared for until she was adopted by a Mrs. Costello of Toronto. At the age of 17 she returned to Kingston, and in answer to her request she was admitted as a Tertiary Sister in February 1901, and later to the Community Novitiate in 1907, thus have to her credit 62 years of convent life.

Most of this time Sister spent at the House of Providence engaged in the various works of the Institution. She was kind to the sick, an efficient worker, and a good Sacristan. For many years previous to coming to the Infirmary she was unable to fill any office, but could be useful in doing light duties.

Sister is survived by one sister, several nieces and a nephew. The funeral Mass was offered by Rt. Reverend J.G. Hanley who was assisted by priests from St. Mary’s rectory. Burial was in St. Mary’s Cemetery.

Marjorie Wherry entered the congregation as a Tertiary Sister in 1901 and was known as Sr. Benita. Tertiaries were auxiliaries who performed domestic labour and were part of the Congregation from 1895 to 1907, when the program was phased out and they were invited to enter the novitiate. She entered the Novitiate on November 11, 1908.

For more information on Marjorie Wherry’s life as an English orphan read her home child profile.