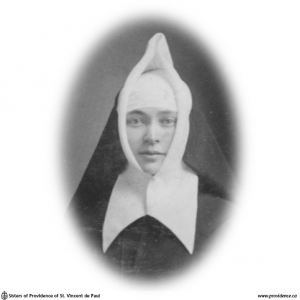 Catherine Dougherty, known in the Institute as Sister Mary Bernadette was born in Co. Derry, Ireland, March 18, 1857. The loss of her loved parents at a tender age together with the unfortunate circumstances of being surrounded by Protestant relations, friends of her deceased mother, forced the lonely child to emigrate to America. While still very young she was constrained to seek her livelihood in the United States. For many years Springfield, Mass., was the principal place of her residence where by her piety and exemplary conduct the young girl won the respect and confidence of many new associates, companions and friends.

The happy day-dream of her life was to consecrate herself to Almighty God in a religious community and her heart, warmed by the gentle influence of charity’s enchanting ray, gave ready response to the call of the Divine Master “Come follow Me,” by entering the Providence Novitiate, Kingston, December 23, 1880.

The Community early recognized in the young novice her proficiency as cellarist and regarded her as a household treasure. In her exterior employments she was generous to a fault, neatness, good-order and economy reigned supervene in whatever office she was placed.

The abounding grace of God and the joy of an assured vocation to the Institute of Sisters of Charity, carried our dear Sister through the trials of the Novitiate and on the Feast of St. Edward, 1883 she knelt at the holy altar to pronounce her religious vows and receive the nuptial gift of her celestial spouse.

Her constitution became much impaired by indigestion and loss of appetite, still she was ever ready to embrace with courageous zeal the tasks assigned her by obedience, cheerfully devoting herself to the service of the poor and orphans, among whom she toiled for several years. She possessed in an eminent degree the gift of human sympathy and never thought she could do enough to console the afflicted in their sickness and discontent and it was over this class that our good little Sister had so marvellous an influence.

In disposition, our dear Sister was simple and childlike yet courageous and energetic; of a volatile temperament she at times, displayed slight evidence of impatience, a weakness she sadly lamented and generously endeavoured to correct. One of the greatest trials of her religious life was a constant mortification or conquering of self, in restraining a vehement attachment to nice things in furniture and clothing, and, although this passion was well-nigh mastered, her love for pretty knick-knacks remained till her dying breath.

The interests of the Community were ever in the heart of our dear Sister and when engaged in the ordinary questing trips throughout the diocese she employed all her energies in securing an abundant supply of provisions and money for the destitute. Combined with this advantage there were warmth, cordiality and a confiding trust in her dealings with strangers which those who enjoyed it can never forget. Many substantial friends were brought to the Institute through the friendliness of our ever dear Sister Mary Bernadette.

During the summer of 1889 the life of this good young Sister was almost despaired of owing to a severe attack of haemorrhage from her head and stomach. The last Sacraments were received with edifying faith and devotion but the thought of death, at any time, was so distressing to her that at this critical moment she unceasingly besought Almighty God to grant her a few years respite. It would seem that her petitions to heaven interposed shields to ward off the death sickle which was to cut down a life so cherished and useful, but a prolonged existence in this vale of sufferings was to be little better than a martyrdom for our dear Sister, for, although she afterwards regained sufficient strength to resume several light charges she suffered intensely. Her services at the Cathedral, the last two years of her life, give us an example of cheerful performance of duty regardless of bodily weariness or lassitude. In this office she displayed rare talent in the art of decorating and was in many other respects a model sacristan.

Her complicated diseases gradually developed into consumption. Nov. 1895 and March 1896 Sister Mary Bernadette was again prepared for death but with these visits of our Divine Lord in the Holy Viaticum the grace of holy resignations was instilled into her heart, former fears were calmed and she eagerly longed for eternal rest with her divine spouse.

At day-break June 28, in the thirty-ninth year of her age and the sixteenth of religious life, our loved and zealous young Sister lovingly offered her heart to God in death as she had done in life, and thus terminated a career, though uneventful, full of earnest effort and good-will. Ah, may the soul of this open and confiding nature, sweetly resting now in immortality, be mindful of those who loved her tenderly here on earth!