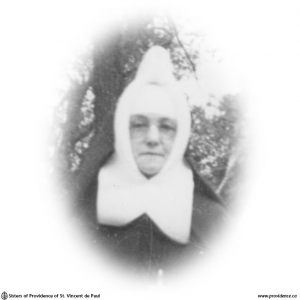 Sister Mary Bernadette died April 11, 1963, at the Hotel Dieu, Kingston. Three weeks previous she was admitted to the hospital for tests and treatment by order of her doctor, but Sister was so weak that the tests were not completed at the time of her death which was rather sudden and unexpected. Mother M. Alban was in to see her in the forenoon, and she found Sister bright and her condition not alarming. In the early afternoon of the same day – Holy Thursday – a phone call came from the hospital to say that Sister had taken a bad turn and was extremely weak. Our Mother General and the members of the Council left immediately to learn on her arrival that Sister had passed peacefully away. The hospital chaplain and two of the Sisters were assisting at her bedside when she died and told our Mothers what a beautiful death Sister Mary Bernadette had.

This was not too surprising, knowing how prayerful Sister was, and zealous for the things of God. For the same reason we believe she kept in touch by correspondence with many outsiders, relatives, and friends up to the last.

Born in Sheffield, England, Sister came to Canada at the age of twelve to the House of Providence where the orphanage was then located. Having spent over a year here she went to Westport, and was employed as a helper at the Notre Dame Convent while attending school there. After four years in Westport she sought admission to the House of Providence as a Tertiary Sister in 1899. In 1908 the Community admitted a number of these Tertiary Sisters, including Sister M. Bernadette, to the Novitiate. In 1910 Sister made profession after which she was appointed to Brockville Hospital. Here she acquired a good knowledge of various duties, including nursing; she could adapt herself well to any work – a favourite occupation was the duty of sacristan.

Sister M. Bernadette was one of the pioneer Sisters in Daysland and Edmonton. Blessed with a wonderful memory, she could recall interesting experiences of the early days in Alberta which she loved so well. In fact she was interested in all our Houses there, and kept in close touch with them since returning to the Infirmary in 1959. One of the greatest joys of her life was the celebration of the golden jubilee of her religious profession in 1960.

Margaret Kelly entered the congregation as a Tertiary Sister in 1900 and was known as Sr. Bernadette. Tertiaries were auxiliaries who performed domestic labour and were part of the Congregation from 1895 to 1907, when the program was phased out and they were invited to enter the novitiate. She entered the Novitiate on November 11, 1908.