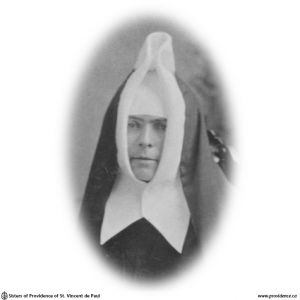 In the immediate circle of our religious family, while the joyful strains of Easter Alleluias were still sounding, death the conqueror enfolds forever a loved member in the person of Sisters Mary Bernard, whose memory is affectionately and piously recalled annually on April 18.

Ellen Fox was born at Emily, Ont., in 1847, of parents remarkable for their fervent practice of religious duties and all virtues that could adorn a Catholic home and family. Wishing to disengage herself from the world and its vain joys, by devoting all her energies to the service of the poor and the afflicted in this Institute of Sisters of Charity, she asked and obtained admission to the Novitiate on the Feast of the Epiphany January 6, 1872.

The term preparatory to receiving the Holy Habit she passed in the diverse minor offices of the House, zealously acquitting herself of every duty, thus meriting the happy privilege of being received as Novice on the Feast of St. Vincent de Paul, 1872.

Our Sister Novice continued in the good spirit in which she had begun, labouring among the suffering and the needy with much tenderness and charity until March 19, 1874, when she was allowed to pronounce her holy vows.

Nature had unhappily denied Sister Mary Bernard many of those amiable characteristics so pre-eminently essential to the religious soul who must necessarily encounter crosses and privations, the wrongs and ills which checker our existence and which are the inevitable lot of humanity.

Not only was Sister deprived of a cheerful temperament, but was the possessor of a sensitively constituted character, that rendered her a trial not alone to her Sisters in religion, but to herself.

At times her physical weakness so predominantly controlled her mental powers that she suffered much disquietude, but turning all to good account she struggled generously to combat nature and devote herself to the glory of her heavenly Spouse. In truth, amid contradictions and humiliations which are the portion of religious, greatly was the lament of this good Sister, that in her was wanting the spirit of lively faith, which would have caused her to embrace these God-sent gifts as a means of sanctification.

An appointment to the mission of Holyoke soon after her religious profession was cheerfully accepted, but an attack of chronic diarrhea prevented the execution of the command.

At no time during her religious career could she boast of robust health. She suffered almost continually from weakness, and to this lassitude may be attributed any slight feelings of irritability so regretfully evinced by our dear Sister. But, if in this religious we have noticed some trifling defects, her life portrayed many characteristics worthy of our admiration and edification. In her tender care of the aged, infirm and orphans in whose immediate service she quietly and unostentatiously performed the stern avocations of every day’s existence for many years, she proved herself a genuine Sister of Charity, by laboring to procure comfort and relief for Christ’s suffering members. And let us trust that such charitable deeds have merited for this devoted Sister the consoling words of our Divine Saviour: “Come ye blessed of My Father, enter in to the Kingdom prepared for you, for I was hungry and you gave Me to eat; I was thirsty, and you gave Me to drink; I was a stranger and you took Me in. Amen. I say unto you so long as you did this to one of these, the least of My brethren, you did it to Me.”

Few details remain of her life and virtues. Her infirmities so completely incapacitated her for office that the Community, always indulgent to its worn out members, freed her from all duties during the last five years of her life, except for a few hours sewing for the orphans, to which she devoted herself daily, and which had been assigned her at her own request.

All that was vital gradually wasting, Sister resembled a walking shadow rather than a living being, yet with a desperate struggle, she kept on foot until Jan. 31, 1894, when, by the advice of the physician she was consigned to the Infirmary that she might receive the care and attention her case required.

After two months suffering, most patiently and resignedly borne, our dear Sister’s life happily terminated April, 18, 1894, while the Sisterhood poured forth fervent supplications to the throne of Mercy in her behalf.

The funeral services were conducted in the Convent Chapel and were most imposing, all the clergy of the city being present. A beautiful closing to a well-spent life of forty-seven year, twenty-two of which merited the reward promised to those who respond to the call of the Divine Master: “Come follow Me.”