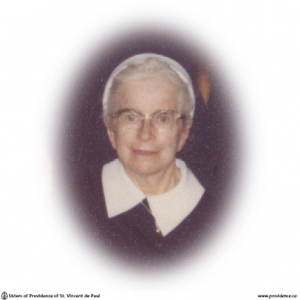 Sister Mary Bernarda died at Marian Infirmary, Heathfield, on January 12, 1981, in the 54th year of her religious life.

Agnes McNamara, born on January 24, 1900, the youngest of a family of six, grew up on a farm in the parish of Madoc, Ontario. In recommending Agnes as a candidate for our novitiate, her pastor, Rev. J. R. O’Reardon, wrote: “She is a good, virtuous, faithful Catholic lady, a worthy child of good, practical Catholic parents.” It is in such homes that we expect religious vocations to be nurtured, and the McNamara family was blessed to have two members called by God to be “more intimately consecrated to Divine service”. An elder daughter, Mary, (Sister Mary Pius) had chosen a contemplative order – Sisters Adorers of the Precious Blood. Agnes entered the Sisters of Providence of St. Vincent de Paul on August 28, 1927.

She had already graduated from Teachers’ College and taught for some years in local schools. So after profession in 1929, she resumed a teaching career which was to last for forty years. For most of those years she was in charge of Grade VIII in elementary schools, acting as well as principal. She taught in St. Mary’s, Kingston, Glen Nevis, Chesterville, Perth and King. Her longest terms were in Arnprior, eleven years, and St. Joseph’s, Kingston, 9 years.

When she accepted superannuation in 1968, she continued to serve in various convents of the Community: a term as Local Superior in King, then as assistant in domestic work (for she was an excellent cook) and as visitor to the sick in the parishes. In 1979 she found going out to the parish church for daily Mass too much for her; she had frequent colds and bronchitis.

So she came to the Motherhouse, but remained active until January 20, 1980, when a fall caused a bad hip fracture. The result of the bone surgery was not satisfactory and after some months she had to undergo a second operation. It was during hospitalization for this treatment that doctors discovered she had cancerous growths in her neck. These soon affected her breathing, swallowing and speaking, and no surgery could be attempted. Sister Mary Bernarda had just to wait until God would call her to release from her suffering.

The inspiration she was to all during these long weeks of waiting is a memory to be cherished. No word of complaint!  When asked if she was suffering pain, the reply was, “Not much.” But a constant serene smile, a hand-clasp, and the scarcely audible whisper to a visitor, “Thank you” and “Good-bye” became her pattern. Her last words were, “Thank you”, to the nurse who had brought her a cup of tea. Before she nurse had time to call any one, Sister Mary Bernarda, with a grateful smile, had commended her spirit into the hands of her Father.

Her two nieces, Sister Mary Florence and Sister Sarah Howell, had been staying with her for her last few weeks, but not thinking that she was in immediate danger of death, had left her room an hour before she expired.

The funeral Mass was offered by His Grace, Archbishop Wilhelm with concelebrants Father McAvoy and Fr. Dan Ryan, chaplains at Heathfield.

The only surviving member of Sister’s immediate family is a sister, Mrs. Annie McAuley, who is a patient in a nursing home in Picton. Several nieces and nephews of the Picton and Toronto areas attended the funeral.

Sister Mary Bernarda will be remembered as an excellent teacher, a fine principal, a devoted, friendly member of the Community with a quiet sense of humour. She was one who exemplified to a marked degree the Vincentian spirit of simplicity which kept her cheerfully faithful to the demands of each day and brought her to her last beautiful moment.

Father McAvoy in his homily at her funeral Mass summed up her life as “an example of faith in action”.