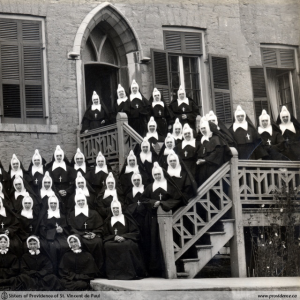 Our Divine Lord has His own time and manner of calling labourers into His vineyard, also, does he stipulate the length of time each may give to His service.

It sometimes happens that one feels an attraction to the Religious Life, would like to embrace it, but owing to circumstances has to put the consideration of it aside I lieu of present duties.

This was the case of our subject. Her parents, William and Mary Morrissey were comfortable well to do farmers, living in the parish of Toledo, near what is now called Jasper. They had but two children, Marie Loretto and John. The former grew up a beautiful girl. After attending the near by school and given some knowledge of music, her education was continued under the tutorship of her excellent mother, who beside instructing her on the duties to God and her neighbour, taught her all the arts of good housekeeping.

Marie was well and favourably known in the country around, especially the parish, where she took an active interest in what concerned her church and divine worship. She was very happy in her home with her good parents whom she tenderly loved and served, also with her young brother. But as there is nothing lasting under the sun, this happiness was to be interrupted. The health of her parents began to fail. They took ill and one after the other died.

She grieved very much over her loss, but she resigned herself to God’s will, and endeavoured to be a comfort and support to her young brother. Not long after her brother took ill. He was attended and received treatment from the family physician. After some time the doctor discovered that his affliction was malignant. There was no cure for him. What a shock this information was to his sister.

Here now, her strength of character, her patience, resignation, as well as previous training came to her aid. She had to give her brother all the loving care his condition required, besides she had to business of the house and the farm. All this she faithfully attended. At the end of seven years her brother dies, leaving everything material in her hands.

After disposing of her property or the greater part of it she came in to Brockville to visit with friends, and spent much time at our hospital where she knew many of the sisters. Here she had time and opportunity to recollect herself. Reflecting that all is vanity, but to love and serve God, she longed to be free from the cares and anxieties of life, to retire from the world and devote the remainder of her life to God’s love and service. Realizing she was much over the required age, she came to Kingston to confer with the Superior General, our Reverend Mother Clement. She in turn, referred the matter to His Grace, Most Rev. M.J. Spratt. His reply was, “By all means, receive her. She is an excellent character. I know her well. I was located in her parish some years ago. It is not her fault that she did not apply earlier”.

Her application was accepted, but she was advised to return, settle all her business, make her will, bringing with her sufficient for all her needs for the next two years, Novitiate expenses etc. Having satisfactorily accomplished all this, she entered our Novitiate on the Feast of St. Michael 1920.

A feeling of happiness and peace pervaded her soul, manifesting itself in her countenance and behaviour.

She was “at home” at once in her surroundings. Eager to learn, she was not long falling in line with every observance. Possessing more then ordinary wisdom and judgement she was soon a source of much comfort to her Mistress. It was the ease she performed every work assigned, whether in the kitchen, dispensary, sewing or other employment. Quietly she accomplished much.

She advanced to Holy Habit Aug. 21, 1921 and to Religious Profession September 2, 1922. She gave a promise on that day to be a useful subject for many years to come. But how little we know of the future. God’s ways are not our ways. Before the end of that year in December, she began to complain much of a sore throat. She went to see a specialist, Dr. C.E. O’Connor. He treated her and she continued to go from time to time to his office as he requested. As time went on, fears were entertained. It was thought she was going into a decline – perhaps tuberculosis was already at work. Dr. Phelan seeing her said afterwards, it might be malignant.

She was moved to the infirmary in the early part of February. On March 1st she was asked if she would not like to be anointed, for it was observed she was getting very weak. She readily assented in the hope that the Sacrament of Extreme Unction might restore her health.

A few days later she got very disturbed and restless, and foreign to her usual demeanour, began to ask was nothing going to be done for her, etc. Dr. O’Connor was sent for at once. He came and after examining her, told her that not earthly power could help her – that he did everything possible to arrest the disease without effect – that it was cancer. After a short time she recovered her equanimity. A retreat coming on shortly after, the Rev. Father T. J. McMahon S.J was most attentive to her, visiting her frequently, as did also His Grace, the Archbishop.

The day of her funeral she had many Masses, the last, a Solemn Pontifical by His Grace, the Archbishop, assisted by Re. Father Killeen of Belleville, Father T.J. Hanley of Marmora, Rev. J. H. McDonald, Toledo.

After the funeral Mr. James McGlade of Brockville, who had come to the funeral, read the will (which she had made before she entered) in the presence of her uncle and cousins.

By the terms of her will, she left the residue of her property about nine thousand dollars, to the House of Providence and St. Mary’s of the Lake.

Our dear Sister Mary Bernarda could have lived in the world very comfortably. She preferred however, to give her wealth to the Poor and follow Our Blessed Lord. May we not hope she attained the object of her desire without delay. R.I.P. Pray for us, dear Sister, that we may follow your example.