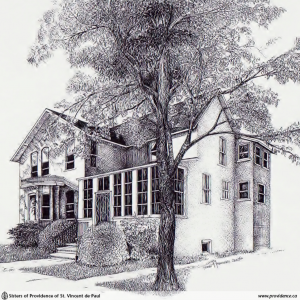 She had been Local Superior at the Convent and was in her usual health until the evening of her death. Being the last day of the year she seemed to make it a special occasion of prayer and reflection in preparation for the New Year. She spent an hour in the Chapel and with her sole companion, Sister M. Thomas they recited several rosaries together that day. She was not feeling well after supper and decided to retire; at eleven o’clock she had passed to her eternal reward. The sad message of her death which was so unexpected caused wide-spread sorrow.

Formerly Margaret M. Young of Young’s Point, Ont., she entered the Novitiate at the House of Providence, on November 21, 1894. In the course she made profession, after which, as a teacher her appointments through the years were to the schools of Kingston, Perth, Brockville, Prescott and Glen Nevis. Later she was in turn Superior at Trenton, Gananoque and lastly Picton.

A religious of sterling qualities she was blessed with a mild, amiable disposition which endeared her to her companions. In the schools she was highly regarded by her pupils and others of her acquaintance wherever she resided. Her Sisters found in her a kind, motherly Superior, much beloved by her Community.

Sister had the happiness of celebrating her Golden Jubilee as a religious at a recent ceremony held in the Chapel of Our Mother of Sorrows, House of Providence. Her nephew, Rev. C.J. Carroll, Pastor of Norwood, Ont., being present for the occasion.