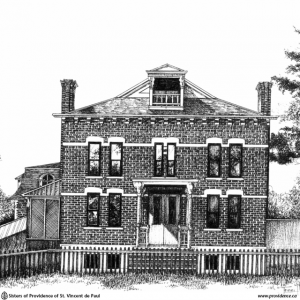 Mary Veronica McGuiggan was born in Perth on January 21, 1895, and baptized six days later at St. John’s Church by Reverend Father Duffus. Her parents, Patrick McGuiggan and Catherine Quinn, belonged to pioneer families of North Burgess Township, Lanark County, a Irish settlement seven miles from the town of Perth. (This district was in 1864 established as the parish of St. Bridget’s, Stanleyville.)

Patrick and Catherine McGuiggan both died while still young and their family of four was cared for by relatives. Mary was brought up in Stanleyville at the home of her father’s sister, Mrs. Cooper. From there she entered the Novitiate of the Sisters of Providence on April 15, 1916.

At profession 1918 she took the name of Sister Mary Bernice and was assigned to the western missions of the Community where she served for three years. Skilled above the ordinary in the culinary arts she spent the next ten years looking after the material needs of the Sisters in the teaching missions of Gananoque, Arnprior and Trenton. In 1931 when the new Motherhouse was established at Heathfield she took over charge of the dietary department and remained at that post for thirteen years. As there were few professed Sisters at Heathfield in the early years, Sister M. Bernice, who was of a lively disposition and enjoyed recreation with her Sister-companions, was dreadfully lonesome. But she became interested in the training of the novices in the domestic arts, and not only contributed to their corporal welfare—her buns were, as they say, out of this world—but also, by her warm and cheerful manner helped to tide them over their periods of homesickness. She had considerable musical talent, played the violin and the mouth organ, and on conges she encouraged the novices to hurry with their work and then, like St. Teresa of Avila, she played the violin and they danced in the kitchen.

In 1944 she was assigned a new type of work to which she was to devote the remaining years of her active life. This was the care of aged women in the Father Down Memorial Home in Montreal. She was as successful in cheering these elderly persons as she had been with the youthful candidates at Heathfield.

In 1966 her strength was no longer equal to her task and she retired to the Marian Infirmary at the Motherhouse. For most of her nine years here she was confined to her room; but occasionally she would join the Community at recreation and entertain the Sisters with tunes on the mouth organ.

On October 30, 1975 the doctor had her admitted to Hotel Dieu, but after two weeks observation and treatment the doctors were decided that nothing more could be done for her heart condition and she was brought home by ambulance. Father Buckley, chaplain, administered the Sacrament of the Sick and the following morning we were summoned to her bedside, as it was thought she was dying. She rallied slightly and for seven days lingered between life and death. Prayers were off offered continuously night and day during these seven days, two sisters volunteering every night, each taking the vigil with the night nurse.

On Thursday, November 20 at 4 p.m. nurses observed that Sister’s breathing had changed and it was evident the end was near. While the Community went to supper at 5:25, Sisters M. Catherine, Olive Gibbons and M. Jerome remained with her and she breathed her last at 5:35 p.m.

His Grace offered the Funeral Mass on November 22, with Monsignor Walsh and Father Buckley present in the sanctuary. Her two brothers and a sister had predeceased her and her only close relatives – four cousins from Perth – attended the Funeral.

Sister Mary Bernice’s kindness to others surely merited the countless prayers that ascended to the throne of God during her long death-agony. May they have obtained for her the REST IN PEACE we implore for all our dear departed!