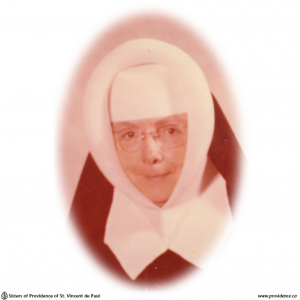 Sister Mary Bertille Coyne died September 22, 1961. When Dorothy Coyne applied for admission to the Providence Novitiate in 1925, she was already well known to the Community. Born in Chesterville, she was the eldest daughter of Bernard Coyne and Rose Kearns; she received her elementary education in the separate school in that village and then made her high school course as a boarder at the Community’s Maryvale Abbey, Glen Nevis. On graduation she attended Ottawa Teachers’ College and taught for a year in the vicinity of her home before her entrance into the novitiate.

She made profession in August 1927 and then commenced a career at teaching which she followed without interruption until Easter of 1960 when she was obliged to undergo surgery in St. Francis’ Hospital, Smiths Falls. After a few months of rest, she returned to the classroom in September 1960, and made a heroic effort to carry on in spite of continuous suffering, which the doctors seemed unable to account for. In December she returned to St. Francis hospital, and a second surgical operation disclosed a cancer too far advanced to allow for any hope of her recovery. She lingered for nine months during which time she made a beautiful preparation for death. Entirely resigned to God’s will she maintained her cheerful spirit and gave no signs of complaint or of self-pity, so that not only the Sisters but all the lay nurses and attendants were happy to visit her room and render her any service.

In August her sufferings increased and her mind wandered at times. But she always knew the Sisters and her family and was always rational to receive the sacraments of Penance and Holy Communion. The pastor, Rev. Dean Fogarty and the chaplain, Fr. O’Connor, were assiduous in their devotion to her, bringing her Holy Communion at any time of the day she was able to receive it. Dean Fogarty was with her for some time the evening of her death and assured the Sisters of the hospital that she was dying in the most perfect dispositions.

In the light of such consoling circumstances, the Community could not grieve over Sister Mary Bertille’s death, though by it they lost a valuable member. Of small stature and gifted with considerable talent in music, Sister made an ideal primary teacher and in Kingston, Arnprior, Smiths Falls, Gananoque, Brockville, Toronto and Belleville she is remembered for her zeal in preparing little ones for their First Holy Communion. But her interest and enthusiasm went beyond her own classroom. She took an active part in the Ontario English Catholic Teachers’ Federation and also in the Catholic Parent Teacher Association, and as president in each organization showed herself a zealous leader in the teaching profession.

The day after her death a requiem Mass was chanted in the chapel of St. Francis Hospital by Very Rev. J. J. Fogarty after which the remains were taken to the Mother House at Heathfield.

In 1953, she celebrated the twenty-fifth anniversary of her religious profession.

His Grace Archbishop O’Sullivan assisted by the Cathedral clergy celebrated the funeral Mass. Burial was in St. Mary’s Cemetery.