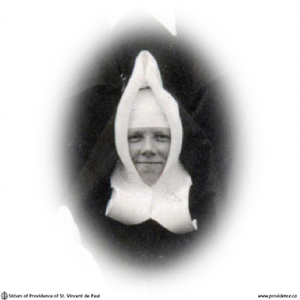 On Monday Evening October 16, 1922, the Community was surprised and shocked by the sudden departure of their cherished little Sister – Sister Mary Bertille.

Stricken with Appendicitis, she was moved to the Hotel Dieu Hospital on Sunday October 8th where an operation was performed with apparent success. She was reported better each day, and was expected to return home before the end of the week. On Monday evening at 5.45 o’clock, after partaking of some nourishment, she took a sudden change, and before the clock struck for 6, she had gone to her eternal reward.

When the first message reached the Providence just as we were going to supper, “Sister Mary Bertille is dying,” a taxi was called, but before Mother Assistant and Mother Vincent were seated in it, a second message came, “Sister is dead”. They went over immediately and learned the facts.

The nurse brought the tray and remained with Sister, while she took some supper, then getting up to leave, Sister asked her not to go, that she felt strange. The nurse looking at her observed the change and notified the Sisters. Rev. Dr. Casey who was in his room not far distant was called, and anointed her while she was breathing her last.

Our Mother General was absent in the far West at the time. Though we experienced much grief and sadness, there is also much consolation in connection therewith.

Sister was at confession and received Holy Communion that morning. Before the operation she made a general confession, after which, before going into the operating room, she remarked to one of our Sisters, who was present, “If God so wills, I am ready to leave this world”.

When the Rev. Father Hanley visited her on Saturday, she told him of a very severe pain in her head. The good priest sympathizing with her and encouraging her, exhorted her to bear all with patience. “Father, said she, “I am glad to have this suffering to offer to Our Lord”.

Sister was the daughter of the late Thomas Coyle formerly of Wolfe Island, who with his family moved to Rochester years before. Sister attended the parochial schools conducted by the Sisters of St. Joseph, and at the age of 24, entered our Novitiate.

After her Profession she spent some time at St. Vincent de Paul Hospital, Brockville, but not being blessed with a robust constitution she was recalled to the Mother House. She was employed in the different offices of the House, in the wards, kitchen, dispensaries.  For a year or more previous to her death she did not enjoy very good health, but was always able to be present at the Religious exercises and to attend to light duties. Possessed of a sweet, gentle disposition and manner she was dearly loved by all her companions, all of whom were shocked and grieved at her sudden departure.

Mass was offered the next morning by Rev. F. Keaney and the following morning by Rev. Father Coyle. The funeral Mass on Wednesday was a solemn Pontifical by Most Rev. E.J. Spratt, D.D. assisted by Rev. Michael McDonald who was a cousin, Rev. A.J. Hanley, Rev. R.J. Coyle a cousin also, and Rev. E.M. Leacy, after which the remains of our beloved Sister were placed beside her Sisters in the Community burial place.