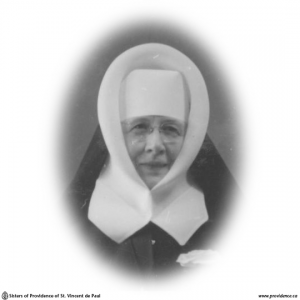 The Sisters of Providence and especially those of Providence Manor, Kingston, were shocked and grief-stricken in mid-June 1971 when a doctor’s verdict informed them that Sister Bibiana was suffering from terminal cancer and her life expectancy was not beyond six weeks.

Sister had charge of the music studio at Providence Manor and was preparing a large class for examinations at the end of June. Sister Mary Demetria, First Assistant, who was acting Superior while Mother Mary Jean was absent in Europe, noticed that Sister did not appear well and advised her to see a doctor. Sister M. Bibiana begged to be allowed to delay a doctor’s appointment until the examinations were over; but during the second week of June she became so ill that the doctor had to be called. He ordered an immediate admission to hospital and on examination his fears were confirmed and his diagnosis was proved correct. Sister died on July 23rd.

Sister Mary Bibiana (Anna Loretto Keilty) was one of a family of twelve born to Andrew Keilty and Catherine Fenlon of St. Edmund’s parish, Stoco, where the pastor Reverend John Quinn was a zealous promoter of religious vocations.

Sister M. Bibiana came to the novitiate on January 6, 1914, and after profession in 1916 was assigned to Maryvale Abbey, Glen Nevis where she remained for ten years. Blessed with a talent for music, she realized that talents must be developed by hard work, and so by assiduous study and practice she became one of the Community’s outstanding music teachers.

For fifty years she devoted her time and talents to the cultural development of young people in the music studios of Trenton, Belleville, Gananoque and Kingston. Her contact with youth as well as her own buoyant disposition kept her as energetic and enthusiastic in 1971 as she had been in 1921, so that no one had any intimation of the onset of the insidious disease until it was too far advanced to be arrested.

The remains were taken to Providence manor the evening of the 23rd, and at 8 p.m. Father Price, a native of Trenton who had known Sister there, and a seminarian came to celebrate with the Sisters a Bible vigil in the chapel. As the Chapter was in session at the Motherhouse, Our Mother General, the other members of the administration and many of the delegates joined the Sisters of Providence Manor for this consoling ceremony. Father Price paid tribute to Sister M. Bibiana’s wonderful community spirit and the kindly humor and joy which she maintained even in her last days of suffering. After the chapel vigil all went in procession to the solarium where the remains lay and with many of the residents of the Manor prayed the Rosary.

The following day the body was brought to Heathfield and that evening Father Bernard O’Neill, Sister’s nephew, conducted a Bible vigil.

The funeral on July 26th, feast of St. Anne and Sister Mary Bibiana’s original name-day, was one of the largest ever held at Heathfield. His Grace Archbishop Wilhelm concelebrated the Mass with Father Bernard and a cousin, Father Francis O’Neill. Present also were Monsignors Farrell, Hanley, and Walsh, and Fathers Buckley, Feeney, Briceland, Hamilton, Paul McAvoy, Keyes, Clement, Collins, Raby, Price and Daniel Ryan. After Mass the Archbishop and priests went in procession through the chapel and stood in the vestibule until the casket was carried out. A group of Sister’s pupils, many of them non-Catholics, came for the funeral.

Fathers Bernard and Francis O’Neill recited the prayers at the grave.