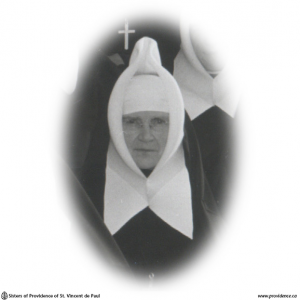 Mary Alice Corrigan was born at St. Foy, Quebec on July 28, 1889, one of eight children of Thomas Corrigan and Helen McCartney, and was baptized three days later in the parish church of St. Foy.

As a young woman she graduated from the Nurses’ Training School of the Jeffery Hale Hospital of Quebec City, and during the First World War served as a nursing sister in England

In 1923 she entered the Novitiate of the Sisters of Providence and made profession two years later as Sister Mary Blanche. Except for three years at the Father Dowd Home in Montreal and a few years with the children at St. Mary’s Orphanage, Kingston, Sister’s entire active religious life of thirty-five years was spent in caring for the aged at Providence Manor and the infirm Sisters at the Mother House.

In 1958 her health declined and for fourteen years she was a patient in the infirmary. During this time a fall resulted in a fractured hip, but Sister made a good recovery and was able to walk again. Then she suffered a stroke which kept her confined to her room for the remainder of her life. She retained her mental faculties and was able to follow the spiritual exercises of the community over the P.A. system.

On March 18, 1972 she commenced the annual retreat. On the 20th she asked to receive the Sacrament of the Sick although no one thought she was in imminent danger of death. On the morning of the 24th Sister Mary Martin went, according to custom, to pray the Rosary with her, and before she had completed the last decade she noticed that Sister Mary Blanche had stopped breathing.

Sister Mary of Lourdes had died a few hours earlier, and their double funeral was held on March 27th.

There were no survivors of Sister’s immediate family. Several nieces and nephews living in Quebec City were faithful in writing and visiting her, but heavy snow storms that had recently hit that area prevented any of them from coming to the funeral.

Sister Mary Blanche in her prime was an efficient nurse, devoted to duty and kind to her patients. In later years she lost interest in the things of the world and thought only of death and longed for it rather too persistently. Her desire, however, must have been pleasing to God, for she had the privilege of dying on the eve of the beautiful feast of Our Lady while the Rosary was being prayed with her and for her.