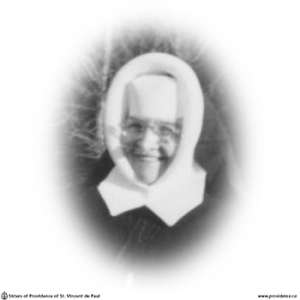 In 1906, Annie Brennan, daughter of Thomas Brennan and Bridget Healy Brennan, left her home in County Sligo, Eire, to offer her services to God in our young country, which was still for the most part a field for foreign missionaries.

The Brennan family home was the typical Irish household where God was King and Master, and His service was the thought impressed on every member. It is not surprising, then, that of the eight children of the family four dedicated themselves to God in religious life.

Annie was the second of the eight and the eldest girl. After her school days she remained at home helping with the care and training of the younger children until she heard the call of Christ “Follow Me”. She was attracted towards the Franciscan Sisters and applied for admission to that order in Rome when one of those incidents occurred which we sometimes call chance, but which are really part of God’s plan. A cousin of the Brennan family, Reverend Canon John McDonnell, returned from Canada where he had visited his sister, Mother Mary Scholastica, the Superior General of the Sisters of Providence of Kingston. Father gave such a sympathetic account of the work done by our congregation and the need for more workers in that part of the vineyard that Annie with two other young women felt impelled to join her relative in the “new world”.

During the days of her novitiate at the House of Providence in Kingston Annie Brennan knew that she was following God’s Will for her, and she pronounced her first vows on November 21, 1908, taking the name of Sister Mary Bonaventure. She was then sent to St. Vincent de Paul Hospital, Brockville, to train as a nurse, and after graduation in 1911 spent a few years in that hospital and in St. Francis Hospital, Smiths Falls.

In 1918 she was assigned to Providence Hospital, Moose Jaw, where she was destined to remain for twenty-eight years. During her term there the prairie province passed through a crisis of drought and depression – the dust bowl era as it was called – when the patients had no money to pay their bills, and the Sisters were attempting to pay off the capital debt on their building as well as the interest. They were obliged to go out among the farmers and beg for vegetables and meat, and thus they provided the staple foodstuffs and were able to keep their doors open to the sick and suffering. A letter to Sister Mary Bonaventure received at Christmas, 1960 from a citizen of Moose Jaw contained the following sentence: “Let me tell you that although everything is bigger – buildings, equipment and staff – the heart and spirit of it is no bigger, nor will it ever be, here or anywhere else, than it was under you and your fellow-sisters of yesteryear, and in particular during the trying hungry thirties. Your constant vigil, your sympathy and understanding and your ministrations to the helpless and the hopeless left their imprint in the hearts of so many as true and abiding and tested charity. It will live long after you.”

Sister was appointed the first local superior of the second house in Moose Jaw, St. Anthony’s Home for the Aged, and here too she had to face difficulties. On September 1, 1939 twenty guests were settled in the home; on the third of the month the building had to be vacated as it was to be taken over by the Department of Defence as quarters for the soldiers. The following year the military authorities found a more suitable building and Sister Mary Bonaventure re-assembled her guests whose number soon increased to one hundred and sixty-five.

After a six year term in St. Anthony’s, Sister spent six years as Superior of St. Mary’s Hospital, Camrose and then returned to Providence Hospital, Moose Jaw, this time as Superior of that mission. In 1958 she came to the Motherhouse to celebrate her Golden Jubilee, and then was sent to take charge of St. Joseph’s Vocational School, Winnipeg. After one year, her health, precarious for some time, obliged her to relinquish her office and retire to the infirmary at Heathfield.

Two surgical operations revealed that she was suffering from cancer, and, an experienced nurse, Sister was aware of her condition and realized that no doubt she would have to endure a long period of pain. Such was the case. But her many years of caring for, comforting and cheering other sufferers had strengthened her for the four years’ struggle, and enabled her to maintain her cheery smile and kindly Irish humour. No one knew better than Sister Mary Bonaventure the source of her strength and so in spite of pain and sleepless nights, she kept up until a few weeks before her death the practice of walking to  the Infirmary chapel for morning Mass and Holy Communion, and later in the day for an hour of adoration. Even after she was no longer able to leave her bed she was blessed in having her mental faculties and being able to enjoy the great consolation of daily reception of the Holy Eucharist.

On July 17th, it was evident that her strength was rapidly failing, and the chaplain administered to her the last rites. On the 20th, the first Community retreat of the summer opened and for the next four days Sister-retreatants spent most of their free time praying at her bedside. On the morning of the 24th, Sister was unable to receive Holy Communion and throughout the day she remained in a semi-conscious condition. After Benediction, the retreat director, Reverend Julien Phelan, O.F.M. visited her and gave her absolution. Her sister, Sister Mary Scholastica, also Sister Mary Electa and Sister Mary Laurena, the night nurse, began the night vigil praying almost continuously until at 2:30 a.m. Sister Mary Bonaventure quietly breathed her last without a struggle, her face no longer quivering with pain, but serene almost smiling. Only one ejaculation could come to the lips of those present, “Deo gratias for a beautiful soul gone home!”

Of her immediate family the only surviving member is Sister Mary Scholastica, General Secretary at the Motherhouse. Her priest brother, Father Thomas Brennan, died at Seattle, Washington in 1943; the fourth religious, Sister Mary Rose Berchmans of the Community of the Servants of the Mother of God, died in Roehampton, England in 1960.