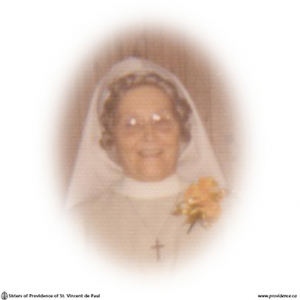 John B. Lansing and his wife, Rose Isabell Merrick, were both born in Burlington, Wisconsin, just north of Chicago. For a while they farmed in Minnesota and then, in the fall of 1902 came as homesteaders to the area around Spring Lake, Alberta, which is eight miles from Daysland. Many other families of similar German origins had chosen the same locale. Although the Lansing’s raised nine children, their daughter, Frances (Mrs. Anthony Gau) who lives at Rosehaven residence in Camrose, Alberta, is the only surviving member of the immediate family. There are, however, numerous second and third generation descendents still in the Daysland-Camrose region. The story of the Lansing family is part of the history of the Sisters of Providence of St. Vincent de Paul because one of the girls, Jennie, became our Sister Mary Boniface.

Johanna Catherine Lansing (who was also called Genevieve or Jennie) was born in McCallville, Minnesota, on February 17, 1902. She was baptized in the church of St. Thomas in Kent, Minnesota, and was only six-months old when her family made the long trek from Kent to their new home in Alberta. Her early education was taken at St. Leo’s School, six miles south of Daysland. Social events were popular in the rural settlement they gave the people of the farmlands and small scattered villages an opportunity to come together. As a teenager, Jennie attended many of these entertainments and is remembered as a beautiful dancer. The Lansing’s suffered two tragedies while Jennie was still young – their home was destroyed by fire and their beloved father died in 1919.

Before her high school education was finished, Jennie had decided to enter the convent. The Sisters of Charity of the House of Providence had arrived in Daysland in 1909 and Jennie had seen them on their collecting tours in the parish. In fact, several homesteaders willed their lands to the new Providence Hospital to help settle unpaid accounts and to further the good work. To enter, however, meant going a long way from home to the Motherhouse at Kingston. Arrangements were made for her to travel with Sister Mary Camillus (Bradley), Superior at the hospital, and Laura (Loretta) Buchanan, another young lady from the area who was also entering. The original idea had been that Frances Lansing would enter with Laura as these two were great friends, but in the end Frances decided against going and Jennie took her place. The Daysland annalist records that the two aspirants “received the postulant’s dress and cap in the community room, in the presence of all the Sisters” and then left “on the midnight train”. After stops and Providence Hospital, Moose Jaw, and visits in Toronto with relatives of Sister Mary Camillus and several of our Sisters billeted in Neuman Hall during the summer school, they were received at the House of Providence on July 9, 1921. These two young ladies were the second and third ones to enter from the west, Sister Mary Adalbert (Rozmahel) having preceded them in 1913.

During the time she was a postulant, Jennie Lansing contracted the dread smallpox. This was the first of many illnesses that were to dog her path for the rest of her religious life.

At profession, Sister Lansing took the name “Boniface” in honour of that wonderful “Apostle” whose name had been given to the church erected in Spring Lake in 1910 and in which she had been confirmed. In Novitiate she had been sincere and devout, appearing capable of further education, and so she went off to Glen Nevis to complete her high school courses and prepare for a career in teaching. But these plans for her future had to be altered when bouts of appendicitis interfered with her studies. She was sent instead to do office work and her first appointment as a junior professed Sister was newly opened St. Mary’s Hospital, Camrose. Surely she was glad to be back west, but again illness intervened and she had to return to Kingston even before the time came to make her final vows.

After finalizing her commitment, Sister Mary Boniface served first in Brockville and then was able to return to the west for terms in Moose Jaw, Winnipeg, Daysland and again in Moose Jaw. While serving in these health-care institutions, Sister earned membership in the American Association of Medical Record Librarians, and, as far as her health would allow, she carefully and conscientiously carried out the office work assigned to her.

In March, 1952, accumulating medical problems brought Sister back east once more and she assumed a semi-retired life-style at the House of Providence, unable to hold any position full-time.

This trial of continued ill health was a heavy cross for Sister Mary Boniface and it seemed a mystery to others because she was a tall, able-looking woman, who kept herself immaculately, groomed and possessed a calm and dignified demeanor. She was able to win respect and consideration from business people with whom she dealt. However, the heavy dark areas often seen below her eyes indicated to an observant onlooker that all was not well.

She wrestled within herself with the problem of suffering and how she might realize her vocation in it. In her notes is the telling quotation:

“Suffering may be sent to us because we have been too narrow and selfish in our view of it, and also to prepare us for our work in helping others in trouble. Sorrow can thus become a talent to be used for the good of others by being invested in sympathy.”

Apparently she was able to accept this unique calling. Archbishop J.A. O’Sullivan, in expressing sincere appreciation to her for a Spiritual Bouquet Christmas gift, congratulated her saying, “I am so proud of the way you carried your little cross so far.” And she did show an understanding heart, bringing to others consolation and courage. She was ever alert to do a kind deed. While at the House of Providence, she often helped the residents by shopping for them, even taking one or two with her. Very skilled in handicraft – knitting, crocheting, tatting, etc. – she added to the joy of others by gifting them with things she had made, or helping them in the occupational therapy department to choose yarns, threads, materials and patterns to suit their needs. Many an item she produced for the annual bazaar. Sister Martha McKenna remembers a wonderful occasion when Sister Mary Boniface came to her aid. Against great odds the lads of St. Mary’s and St. John’s Schools, Kingston, had won the separate school hockey trophy. It was time for pictures and the boys had only old discarded uniforms. Sister Martha managed to get new white sweaters and Sister Mary Boniface performed a labour of love in sewing the red felt initials on the fifteen white t-shirts in time for newspaper and television interviews.

Sister further recorded in her notes: “The ultimate test of life is not what we attain in possessions or position, but the quality of spirit with which we meet whatever comes.” In many areas of life Sister M. Boniface showed a remarkable thoroughness. To her friends and family she was most loyal, helping them in times of need in whatever way she could. She kept up a regular, voluminous correspondence, making detailed notes of contents of letters coming and going, and never failing to recognize birthdays and anniversaries. If you did anything for her, she was sure to thank you most graciously. She read widely, looking out for the best selections; kept track of social issues and enjoyed exchanging ideas about them. A student of her faith, she was always interested to learn what the Church taught and “could share wise insights from a quiet self-fulfilled peacefulness”.

As might be expected, at times there was added to her physical suffering, the possibility of being misunderstood. It seems that she may have coped with this by developing a love of silence, taking as her models St. Joseph and the silent Christ of the tabernacle. On an old prayer card she kept this reflection:

Where  we Learn Silence

She also kept that more familiar poem entitled, “Don’t Say a Word”, and she remembered “The love of silence leads to the silence of love”.

In April, 1978, Sister came to live at Heathfield. She had injured her arm and shoulder in a fall. Before many years had passed she became a resident in the infirmary proper. Because of her quite ways, her need for rest, and further health problems, she did not become well-known in the house and so suffered much at this time from loneliness. It is not known if the words are original to her, but she wrote, “In the basilica of years stands the main altar on which holocausts of a lifetime are offered amid incense of agonizing prayer, and the greatest of these holocausts is loneliness.

She used her time and the declining strength of senior years to prepare to meet Him for whom she had given her life. This passage Sister copied from “Lucent Clay”:

“Old age is the period for being rather than the period of doing. Wrapped within the hushed and silent tapestry of declining years, we can more easily hear the call and minister to the needs of heart. In the flush of youth we live too much by sight, now in the years richly laden with experiences of the past, we live more by thought whose mission is to probe beneath the surface and to pierce the heights that bring us in closest touch with God.”

Sister Mary Boniface had not many years to wait before seeing God face to face, but even still her trials increased as she developed Alzheimer’s disease. During this period Sister Mary Annette (Kennedy) assisted in keeping track of Sister’s correspondence and her classmate, Sister Loretta Buchanan, herself a Motherhouse resident as well, often recited the Rosary with her. In her years at Providence Manor, Sister Loretto Boland had often visited her and helped to speed the lonely hours.

On February 13, 1986, Sister Mary Boniface very quietly died of pneumonia about 4:30 p.m. The Funeral Mass on February 15 was concelebrated by Reverend T. Raby, Vicar General, Monsignor J.G. Hanley, Reverend J. Rozon and Reverend L. Byrne. In his homily Father Ray remarked: “Our life, whether it is judged of great importance or slight by others, takes on the greatest meaning and value because of our union with Christ…God calls certain ones to a vocation that more closely associates them with His cross – the vocation of being different because illness will not let one be the same as others. This was Sister’s vocation and we are grateful to God that, in her, He found one who bore it well. Now the time has come for a new kind of activity as she walks in the presence of the Lord.”

Sister Mary Boniface did well to make her own the words of the first reading of her funeral Mass: “It is good to wait in silence for Yahweh to save.”  (Lam. 3:26)