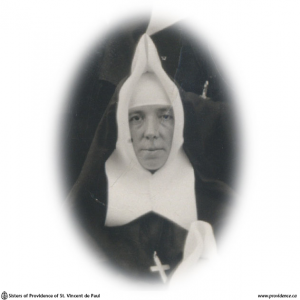 Sister Mary Brendan died on Thursday, December 22nd at 6.00 p.m., after a lengthy illness. Bridget Agnes Walsh was a native of County Mayo, Ireland and left her native land fifty-five years ago to join the Sisters of Providence Community in Kingston. This young girl who had been highly recommended by the pastor and clergy of her home parish in Kilmeena, was accepted as a candidate by the Community and admitted as a postulant in October 1906 to the Sisters of Providence Novitiate, House of Providence, Kingston.

Following her profession in 1908, her first assignment was to Providence Hospital, Moose Jaw. After a few years in the West she was appointed to St. Vincent de Paul Hospital, Brockville, where she spent a number of years in charge of the dietary department. In delicate health she returned to Kingston in 1921 to aid in lighter works of the Community at the House of Providence and remained there for the rest of her life, without fully recovering her normal health. In 1958 Sister Mary Brendan celebrated the golden jubilee of her religious profession with three other golden Jubilarians, here at the Mother House, “Heathfield.”

After her long years in religion it was sad to find her gradually losing all mental balance, until it was found necessary, as the only safe procedure, to finally arrange for treatment and have her admitted to the Ontario Hospital. Sister died there less than two months later of pneumonia. While it was a source of regret that the treatment proved of no avail in restoring her to health, as the Community had hoped it would, there were other consoling factors surrounding her last illness and death, which are worthy of note and may be recorded in favour of the Hospital. In her short stay there, it was evident to all who visited her that Sister got the best of care and the nurses were kind and most attentive. Mothers M. Electa and M. Ivan were with Sister all night previous to her death and Sister M. Fidelis watched by her bedside throughout the next day until she died about 6.00 p.m. Rev. T. Brady, the zealous chaplain at the Hospital, could not have been more solicitous for her spiritual comfort, and having arranged to be notified of any sign of approaching death, he made a special effort to be present and was by her bedside in her last agony and death, assisting by his prayers and priestly administrations. May her soul rest in peace.