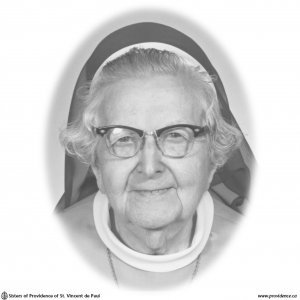 On May 31, 1924, the Providence Motherhouse annalist recorded the arrival at Kingston of “the first young lady from Nfld”. One might ask how Providence brought that about, since none of our Sisters lived or worked in that East Coast Island.

The story of Bridget Mary Tee’s call to be a Sister of Providence of St. Vincent de Paul begins with her birth on September 6, 1898, at Burnt Cove, Tor’s Cove, Newfoundland. She was the fifth child in a family of seven – four girls and three boys – born to Catherine Hearn and William Tee. Mr. Tee was a fisherman, who also did some farming. While self sufficient, he was far from rich. Once a year he would receive the proceeds of the season’s catch of fish, and once a year he made the trip to St. John’s to purchase winter supplies. The family homestead was about nine miles from St. Patrick’s Church at Witless Bay, where the children were taken to be baptized. They were educated at St. Michael’s School in Tor’s Cove. It was one of those one-room wonders that you hardly find anymore.

Bride, as she was called, finished with school at age sixteen and found work in the local rectory. It was to one of the priests there, a Father J.J. Coady, that she went in the fall of 1923 to discuss her desire to enter a religious community. Her oldest sister, Mary, was already a member of the Sisters of the Presentation of the Blessed Virgin Mary, a congregation with headquarters at St. John’s, but Bride was firm in her feeling that she was being called to some community far away. When she told Fr. Coady that, he remembered that, on his visit to his cousin, Dr. O’Connor, in Kingston, Ontario, some sixteen years before, he had heard of the Sisters of Charity of the House of Providence located in that city. On December 22 he sent a letter to Mother Mary Clement (Shea). After the preliminaries of introduction, he wrote, describing Bride and her family:

“She belongs to a good, religious family, is about twenty-one years of age and bears a splendid reputation. She went to our Parish school till she was sixteen and has since then been in service with Rev. Fr. McCarthy and we both can testify to her character and sincerity. She is conscientious, industrious, pious and willing…I can fully recommend her to any convent as I know, wherever she is, she will do her very best. Her people are simple fisherfolk and have not got the goods of this world, but they have what is much better, good Catholic principles and (are) faithful in carrying them into execution in daily life.”

A reply was not long in coming and on January 17 Bride Tee wrote to thank Mother Mary Clement for accepting her, sight unseen. She outlined her plan to come by boat up the St. Lawrence to Kingston in a few months. A picture of Bride, taken about this time, reveals a confident, capable young woman of stocky build.

According to Fr. Coady’s letter, Bride Tee had hopes of being a teacher or a nurse. For reasons so far unknown, she was directed instead into domestic work and child care. She served sometimes at one of these occupations, sometimes at the other, and often at both. From St. Mary’s of the Lake Orphanage, Kingston, she went to St. Michael’s, Belleville, in 1938, then back to Kingston to care for the orphans at Heathfield Villa, before heading west in 1945. At St. Mary’s Home, Edmonton, St. Joseph’s Vocational School, Winnipeg, and Rosary Hall, Edmonton, she was to continue working another 23 years.

From all the locations where Sister Mary Bride lived and laboured, there is a common remembrance of her as gentle, generous, smiling and devoted to her charge. One example comes from depression days, when Sister was stationed at St. Mary’s of the Lake Orphanage.  After working all day in the kitchen, she was sent one evening to look after the nursery. On her arrival, she discovered that there were no fresh diapers. She took herself straight-a-way to the Superior’s office and sat there until the Superior came. Together they tore up flannel and Sister Mary Bride returned to the nursery with a supply to last the night. When she was cook, “dinner was always ready on time, nicely laid out and nutritious. Sister would slip on a clean apron to serve”. Not only did she feed those in the house, but also the ‘street people’. In Edmonton, she would put hot soup out in the yard for ‘travellers’, until complaints by neighbours ended her efforts, but only temporarily. When the Combermere community began a food service in the city from Mondays to Fridays, Sister Mary Bride true to her charism, filled the gap left on Saturdays and Sundays. Never one to complain, Sister fell one day on her way to town to shop. She suffered a broken wrist, but finished the shopping before seeking treatment for herself.

In 1968, in Edmonton, Sister Mary Bride had a mild stoke. She made wonderful efforts to recover – even touring visitors all around the institute so as to improve her own walking – but she was never able to resume full-time duties. In 1971, she accepted a transfer to the Motherhouse. As long as her eyesight was adequate she worked in the occupational therapy room, making aprons by the score, but eventually even that had to be given up.

Her final years were very quiet ones. She seldom joined in conversation and it was easy to account for this with the explanation that she was very hard of hearing. But, it seems there was more to it that that. In her prayer collection was this unusual request:

A prayer to obtain the love of silence;

My Lord Jesus Christ, Divine Word, so silent, Infinite and Incarnate Wisdom, Who spoke so well, so usefully, so perfectly, yet never-the-less, spoke so little, impress me with the necessary esteem and love of silence. Impart to me the grace to practice it after Thy model and in Thy spirit when Thou hast the ineffable goodness in Thy adorable Sacrament to touch my lips. Purify and sanctify my tongue that it may never utter a misplaced nor useless word. Grant me great interior recollection and the grace to speak where, when and as I should. Amen.

As well, there were pithy sayings found in her notebook such as, “A short intellect usually has a long tongue.” and “They always talk who never think.” Which came first, the deafness or the love of silence, we may never know, but in any case, she seems to have won that grace which St. Paul said is the key to all virtue.

One topic Sister Mary Bride did like to talk about was her family. She was particularly proud of her brother, Gerald, who had had about sixty foster children by the time he died at age of eighty-two.

Another devotional theme very evident in Sister Mary Bride’s prayer life was that of the Passion. Feeling in need of strength, she wrote, “This I beg, O Merciful Father, through the Passion of thy Son to whose honour I consecrate this and all my days.” In common with many Sisters her age, she believed in attending Mass as often as possible and had written out points in defense of this practice.

She was like her peers in another way, too; she liked to be independent, getting her own snack at night and doing her own laundry. In fact, she was on her way back from the small laundry in the 1932 wing of the Motherhouse on May 10, 1988, when she fell in the elevator and broke her right arm. She had been noticeably falling and the fall precipitated the end. Within a week, it was decided that she needed hospital care. Her family was notified and arrived. After a few days Sister persuaded them to return home, insisting there was no need for them to remain. In June, they happily had a more lengthy visit with her at Heathfield. However, recovery was not to be. She was hospitalized again. On her way there, someone reminded her of her wish to die at the Motherhouse, and she replied, “God ill take care of it.” And so He did. The doctors released her to palliative care in the Marian Infirmary only a few hours before she died on June 30, 1988.

The funeral Mass for Sister Mary Bride was held on July 2.  His Grace, Archbishop F. J. Spence, concelebrated with Rev. M. Meehan, CSsR, Rev. J. Rozon, Rev. W. Steacy, CSsR and Rev. D. Hale. Her family, to whom she was very dear, was represented by a niece, two grandnieces and a grandnephew. Sister was interred in the Community plot at St. Mary’s Cemetery, Kingston.

Before closing this necrology, it is fitting to mention one more fact that gives evidence of the esteem with which Sister Mary Bride Tee was held by the Sisters of Providence. In the 1970’s, when the number of young women entering religious life had greatly declined, a special small community was created at Heathfield to give support to Sr. Margo Shafer, who was facing her training years without companions. Sister Mary Bride was chosen to be the senior member of that group.

The most well-worn book in Sister’s possession was “Simplicity According to the Gospel”, by DeGibergues. She chose few belongings, and few words, but she won many hearts – not the least being that of her God.