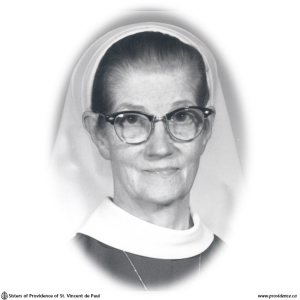 Annie Josephine Cusack, a native of Ballanade, County Monaghan, Northern Ireland, was born on September 22, 1914, to James Cusack and Anne McAree, who migrated to Canada in 1921 with their eight children and settled on a farm in Vegreville AB.

Annie worked at St. Joseph’s Hospital, Edmonton, on the floors and in the diet kitchen before she entered the Sisters of Providence on August 15, 1938. Sister Mary Martin and her parents encouraged her to follow her desire to enter religious life.

Annie made profession on August 15, 1940, taking the name of Sister M. Cabrini. Sister was missioned to the men’s ward at the House of Providence after profession and worked with the aged for two years. She then went to Rosary Hall, Edmonton, where she made her final profession. After working for a short time at a boys’ home in Edmonton, she was missioned to the Father Dowd Memorial Home, Montreal, as sacristan at St. Patrick’s Church. She was also in charge of the altar boys. Sister Mary Cabrini was an exceptional sacristan and loved her work. She was assigned as sacristan to Heathfield after working with the boys for four years at St. Joseph’s vocational School, Winnipeg. She was happy to continue the type of work she loved. Sister had to retire to Marian II in 1988 due to failing health.

Sister M. Cabrini had a great love for her family and had a great influence on the lives of her many nieces and nephews. For them, there was no one like their Aunt Annie. She loved religious life, her religious family and her Provident God.

Sister M. Cabrini died a peaceful and happy death on Thursday, February 18, 1993. At the wake service, the Sisters shared their memories of Sister and attested to her generosity, kindness, compassion and wit. She was an excellent seamstress and was known to occasionally repair the clothing of the priests. Sister is at peace; her benign and peaceful countenance was truly symbolic of the beautiful and tranquil life she had lived. At the end of the service we sang “Galway Bay”.

Monsignor Breen, Father Peter Timmins and Charles Borcklehurst of St. Patrick’s Basilica, Montreal, attended Sister M. Cabrini’s funeral even though the highways, streets and roads were almost impassable. Their presence was evidence of their love and esteem for Sister, as well as their gratitude for her 24 years of service at the basilica. Monsignor J.T. Raby, vicar General, offered the funeral Mass and delivered the homily. The Sisters sang “Great and Glorious St. Patrick” at the offertory in commemoration of Sister M. Cabrini’s heritage.