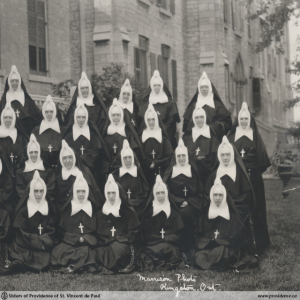 On August 4, 1935, Sister Mary Callistus (Bridget Nelligan) was called to her eternal reward at the House of Providence, Kingston.

Sister devoted a number of years to the sick and poor in the House of Providence. She was also stationed at St. Francis’ General Hospital, Smiths Falls and St. Vincent de Paul Hospital Brockville. Sister was for some years Sacristan at St. Mary’s Cathedral, and at the time of her death she was in charge of the mens’ ward at the House of Providence.

Only the angels, who record the deeds of those who labour in the service of their Master, know the many acts of kindness and self-sacrifice performed by this Sister during the time she spent in the care of the sick.

Sister had been in good health until taken suddenly ill three weeks before her death. Her sufferings were intense, from severe headaches, etc., but she bore all patiently until she peacefully rendered her soul into the hands of her creator.