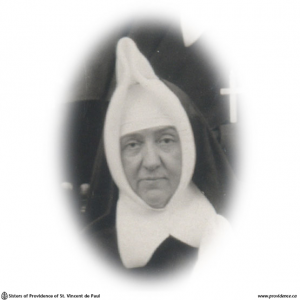 Sister Mary Camillus died on Tuesday, February 20, 1951, at the House of Providence, after a lingering illness.

Margaret Bradley, as she was known, entered the Novitiate in the beginning of the century, September 16, 1900. She was a nurse, having graduated from the Royal Victoria Hospital, Montreal, and then, as well as now, a profession was a valuable asset in a desirable candidate to any community.

In 1904 Sister M. Camillus was one of the pioneers of St. Francis Hospital Smiths Falls; she likewise shared the difficult task of the first Western foundation at Daysland. Four years later she was one of the small groups sent to open the Hospital at Moose Jaw.

Returning as local Superior to Providence Hospital, Daysland, she made many improvements and was in charge when the new wing was added in 1918.

Like her patron, St. Camillus, her charity to the sick was unbounded. No sacrifice was too great to relieve their sufferings, and she spared no effort to bring relief to the poor and needy. Daysland was the scene of most of her labours in the West, and it is not surprising that her name is held there in grateful veneration.

In later years she returned to Kingston and helped in the sick wards with the same characteristic generosity and charity while she was able to be of any assistance. She was a true Daughter of Charity, who tried to emulate in her own life the virtues so dear to the heart of St. Vincent and her own patron St. Camillus. May she rest in peace!