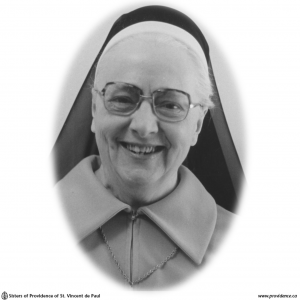 Sister Mary Canice died at Providence Motherhouse, Kingston, on March 22, 1999[sic]*. She was the last surviving member of her immediate family.

Catherine Joynt, the youngest of sixteen children, first saw the light of day in Quebec City on August 18, 1908. Her Irish mother, Bridget O’Connor, was born on the Atlantic Ocean en route to Canada. Her father, Henry Joynt, an American, worked on the boats out of Quebec. Catherine took piano lessons while very young and was an accomplished musician even before she entered the Congregation of the Sisters of Providence of St. Vincent de Paul at the age of seventeen. When Catherine took her first vows, she was given the name of Sister Mary Canice.

Sister taught piano, directed choirs and played the organ in many parishes. She became a specialist in training large groups of children to play in school bands. Her entries in music festivals won several gold medals. Sister studied Gregorian chant in New York and obtained both her A.T.C.M. and L.T.C.M. She also studied advanced organ at Laval University in Montreal.

There was a period in Sister’s life when she suffered mentally. Because of her journey through those painful years she was later able to give more love and understanding to others. She came to a great sense of peace which showed in her radiant countenance. After many years in the music ministry Sister retired to the congregational Motherhouse, where she rekindled her friendship with Sister Mary Noreen. When they were both mobile, they were almost inseparable, walking, shopping and caring for one another. A good friend is such a sturdy shelter.

Sister M. Canice served in the altar bread department until her disabilities confined her to the infirmary. There she accepted her fragility graciously, laughed readily, and had a pleasant rapport with the nursing staff. Sister was very prayerful and although became unable to speak, made special gestures to the prayers. She attended Mass and received communion with great reverence. Sister rewarded anyone who helped her in any way with a wonderful glowing smile which came straight from her heart. At her wake relatives and friends remarked on sister’s love of life and her generous spirit. On her family vacations she loved to baby sit the little ones and would play the piano for them. She was also known to give a few haircuts. Her nephew referred to his Aunt Kit as the “gold nugget of the family.”

The Mass of Christian Burial was celebrated on Tuesday, April 6, 1999 by Archbishop F.J. Spence, assisted by several other members of the local clergy. The homily was given by Father David Hale, who remarked that it is fitting that this faithful Woman of Providence, who over the years came to serenity by embracing her pain, should celebrate Easter in the presence of the lamb, who is her Good Shepherd. May she rest in peace.