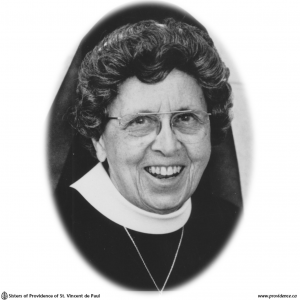 On the Feast of the Assumption, August 15, 1921, Kathleen Cecilia Desjardins entered the Sisters of Charity of the House of Providence. She was only sixteen years of age. About two weeks later she was asked by a relative of another sixteen year old to “look after” the girl as she was coming to join the class. Kathleen said that she would be glad to do that and no sooner had the newcomer arrived than they made plans to sit together at recreation. “Save me the seat beside you.” Kathleen said, not yet alerted to the ‘dangers of particular friendships’. The Mistress of Novices heard the request and chastised her, “None of that! Go and sit beside someone you don’t like.” Kathleen’s innocent reply was, “But, our Mistress, there isn’t anybody I don’t like.” She then took a seat beside a Sister much older than herself.

This simple account illustrates the characteristics most notable in Kathleen Desjardin — innocence, generosity, hospitality and dedication to her vocation. These virtues seemed to be her very life blood as a Sister of Providence. To do anything obviously wrong or deliberately unkind was quite beyond her. If there was work to be done, she was the first to volunteer. When guests needed food or entertainment, she literally ran to give her services. Never would she do anything to lessen her witness as a Sister. To crown all this, in her every activity she exuded joy and energy. To try to capture on paper something of this “holy whirlwind” is the task of this necrology.

Kathleen was born December 20, 1904.  She was the second youngest of eight children blessing the marriage of Henry Desjardins and Josephine Miron. There were to be three religious vocations from the family – Kathleen and the youngest girl, Helena, became Sisters of Providence and the third oldest girl, Mary, entered the Sisters of St. Joseph.

Mr. and Mrs. Desjardins were natives of Trenton, Ontario, and raised their children there. Henry owned the Trenton Manufacturing Company, a small factory operation producing cardboard egg crate liners. His wife, Josephine, was noted for her charity to the poor, her hospitality and her way with children. A neighbour’s child would come to her door to take castor oil that he was refused at home. She served as a mid-wife in the town.

Both Mr. and Mrs. Desjardins loved music and sang in St. Peter’s Church choir. Although they could not play any instrument themselves, they arranged for lessons for the children. Several became accomplished musicians. Harry played the trombone. Alfred the violin, and Rose, Kathleen and Helena learned piano and organ. Often in the evening after the family Rosary, there would be a “home concert” and all the youngsters of the neighborhood would gather, sitting along the sidewalk to listen.

Kathleen completed her elementary education at St. Peter’s School and then went on to high school. After school hours, she took some lessons in shorthand and typing from the principal of St. Peter’s, Sister Mary Rodriguez (Whelan). The young girl greatly admired this remarkable religious and was an active member in the Sodality of Our Lady of which Sister was the moderator. Kathleen remembered Sister Mary Rodriguez as being “like St. Vincent and St. Louise … a contemplative in action” who inspired the sodalist to be the same.

It was June 6, 1921, when Kathleen Desjardins wrote to the Superior General, at Kingston, to ask permission to enter. She states in her letter that she had been thinking about it for some time. When she was in Grade Eight, father Alexis Cunneen, CP, gave the parish mission in Trenton and pointed her out in the classroom as “a girl who is going to be a Sister some day”. Kathleen kept in touch with Father Alexis for several years after and his letters encouraged her in the pursuit of her vocation.

The maturity evident in Kathleen’s handwritten request to enter no doubt spoke in her favour. This combination of maturity and youth made her quick to learn. Sister Mary Roberta (Connolly) who was in charge of the kitchen saw her potential and lost no time to making her into an excellent cook. Although she continued to use this skill throughout her life, Kathleen’s main work was to be in the field of music.

As a very young child, she had stood by the piano, fascinated by the playing of her older sister, Rose. She promptly learned to play herself and by the time she entered religious life, she had had five years of training in piano. Before the time came for her final vows in 1926, Sister Mary Carmel Teresa, as she was then called, had finished all the practical requirements for a Diploma of Licentiate (Teacher’s) from the Dominion College of Music, Montreal.

However, the Community did not wait for her to be properly qualified as a music teacher before sending her out on mission. As a Junior Professed she was assigned first to Arnprior and then to Lancaster. In Arnprior she was ‘junior’ music teacher under Sister Mary Gerard (Traynor). The two Sisters taught at pianos side by side in the big front lobby of the convent. Both counted out loud to help their students concentrate as the nine other Sisters in residence passed by them on their way in and out. The Lancaster posting was not less difficult. Sister Mary Carmel Teresa found herself placed in charge of a music studio, though, as she recalled, “I did not even know how to order a piece of music.

Nevertheless, she persevered and as she moved on to other missions she became more capable with each challenge. She simply presumed that God would support her, and He did. During the six years in Trenton and eight years in Perth, Sister Mary Carmel Teresa worked away at the written exams leading to full qualification as a music teacher. This study had to be squeezed in between her regular hours of teaching piano, giving singing classes in the schools, training the church choirs and often serving as sacristan, housekeeper and practical nurse. There was lots of scope for her talents and energy.

In 1941 the mission of Newmarket was opened and Sister was appointed Superior. In later years she was to fill this same office in Trenton, Tweed, and Perth as well as for a Motherhouse group. When asked what she thought was the most important task for a Superior, she replied, “To work for the happiness of the Sisters. If they are happy, their spiritual life will be fruitful.” She appreciated, too, that being a Superior gave her “the opportunity to minister to Christ in the Sisters”. When she finished her time as Superior in Perth, a Sister spokesperson there had these words of tribute:

“Your practical common sense, your bubbling sense of humour and your contagious enthusiasm have been in inspiration to all of us…In the work done on the convent, your exquisite taste and eye for durability and service are everywhere apparent…and you were not unmindful of our recreational requirements…Your extra special thoughtfulness and sympathy for those of us who had sickness in our families was surely an echo of the Master’s own sympathetic heart and never to be forgotten by us or our families…You have endeared yourself to all in Perth regardless of creed, by your concern, your charity and your bright, happy self and we love you for it.”

As well as the locations already mentioned, Sister Carmel Teresa served a year in Glen Nevis and a year in Prescott. Everywhere she was assigned she made scores of friends by her outgoing, pleasant manner, but no doubt she is remembered best of all in Perth where she lived a total of seventeen years.

It was from Perth that Sister came to Heathfield in 1975 to be the Motherhouse organist. She kept to this duty faithfully until Easter of 1986 when the ravages of cancer forced her to retire soon after the Holy Week services were completed.

Outside of abdominal surgery on one occasion and foot surgery on another, Sister appeared to have had fairly good health over the years. In fact, the scope of her activity even into her 80’s was considered phenomenal. While at Heathfield, she kept herself busy at various tasks around the house and was involved in pastoral care at Rideaucrest and Extendicare nursing homes. She had private piano students as well. The fitness club and bowling league benefited from her regular and enthusiastic participation.

Therefore, it was a shock to everyone when the cancer was discovered in July, 1985. The heavy treatment prescribed cost her dearly and almost brought her to death’s door. However, it seemed to arrest the disease for a few months and Sister was able to return to work. But, in the spring of 1986 the cancer was clearly advancing again, spreading from the pancreas to other organs. It was necessary for Sister to become an infirmary resident in May of that year. On the 25th of May, Helena (Sister Mary Carmel Rose) came to the Motherhouse to be by the side of her sister, ‘Kay” until the end. Sister Mary Perpetua (McCarthy) was a particularly supportive friend at this trying time.

The immense strength and great vigour which Sister Carmel Teresa had exhibited all her life took a long time to wear away. She died inch by inch over the summer months. As long as she could, she received friends who called by, inquiring after their health, their work and their families. When she became unable to manage even a few words, she gave them her beautiful smile. During this painful, gradual dying Sister Carmel Teresa had the unique privilege of having Mass offered in her room every day. Father William Steacy, CSsR, was the celebrant. Many remarked that God was rewarding her in this way for the years of daily Masses, weddings, funerals, ceremonies, etc. when she had served as organist and soloist or choir director.

Sister Carmel Teresa died on September 2, 1986, at 7:00 a.m. It was the anniversary day of her reception of the Habit. She had always been beautifully neat about herself and felt very honoured to wear this ‘spousal garment’ to exemplify her total commitment. Now the time had come to trade it for the white robe of heaven.

Along with Sister Mary Carmel Rose, Sister is survived by two sisters, Flavia and Teresa (Mrs. John Freil) both of Newmarket.

At the funeral Mass on September 4, Archbishop F. J. Spence was the main celebrant.  Archbishop J. L. Wilhelm gave the final commendation. The homilist was Father Brian Price and Father Leo Byrne officiated at the graveside. Twenty-four clergy in all concelebrated. Mr. Brian Lucy was guest organist, playing selections before the Mass and at Communion time. Sister Patricia Ann Ryan was soloist.