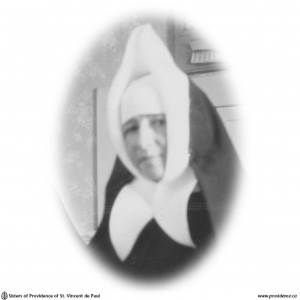 Sister Mary Carmelita died Friday, October 15, 1954. Her death was the first in our new Marian Infirmary. Sister had been at St. Vincent de Paul Hospital, Brockville, and came here when the infirmary was ready for the sick. She seemed fairly well for awhile but soon suffered relapses of weakness and at times great pain. Her hospital record extended over a period of three years, as she was hospitalized successively in Winnipeg, Moose Jaw, Toronto and Brockville. The diagnosis was “dermitomyositis.”

Mary Loretto Kearney, as Sister was known, was born in Wapoose, Ontario the eldest of a large family of her father’s second marriage. She spent five years with an uncle in Toleldo, Ohio, where she had an opportunity to advance her education and assist in his business.

Returning to Picton in 1907, she decided to follow the example of her two aunts, Mother M. Presentation (Kearney) and Sister M. Beatrice (Casey), both members of the Community, and entered the Novitiate, April 3, 1910. In August the same year the Novitiate was transferred to St. Mary’s of the Lake. After her profession in 1912 she remained at the Lake to assist in the Orphanage and other duties. In 1916 she was named for the West, going to Rosary Hall, Edmonton. She succeeded Mother M. Clement as Superior of Rosary hall when the latter was elected Mother General in 1918.

Sister M. Carmelita was a kind Superior devoted to her duties. She was as well, a hard worker and never spared herself. When she left the West in 1933, Sister was appointed local Superior at St. Mary’s of the Lake, Kingston and in 1936 she was elected to the General Council. For the next twelve years she resided at Heathfield, dividing the time between the Mother House and orphanage, as she was in charge of the latter for some years. In 1948 she was appointed to St. Joseph’s Vocational School, Winnipeg, as Superior and remained until her illness in 1951.

The day of her death Sister had the privilege of assisting at the 6.30 Mass which was offered for her by Bishop Jordan, a friend over the years. She had weak spells but persevered in staying for the Mass at which she received Holy Communion. His Excellency called at the Infirmary after breakfast to see her and gave her his blessing. She appreciated this visit and the privilege of having assisted at his Mass and receiving Holy Communion from his hands. It was her last Mass and Holy Communion. Soon after this began to grow weaker and was anointed by Father Flurey at 3 o’clock. She was well prepared and wanted to die. Her prayer was answered when she passed to her reward at 10.30 that evening. Sister M. Flavian and Sister M. Claude, her two sisters, were present and much consoled to witness their Sister’s peaceful, holy death.

His Grace Archbishop O’Sullivan offered pontifical Requiem Mass on Monday 17th. There were present seventeen priests, including Msgr. Carlton and Msgr. Byrne. Burial was at St. Mary’s cemetery where Father Flurey recited the prayers at the graveside. May her soul rest in peace!