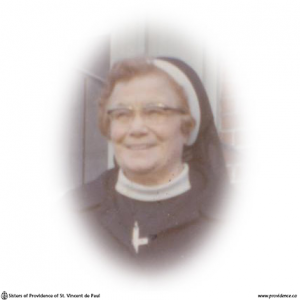 James Boyle and Elizabeth Powers established in Belleville, Ontario a truly Catholic home which was pleased with four sons and six daughters. From such home the Church looks for vocations in religious life, and in this one she was not disappointed. The eldest daughter Evelyn after a few years teaching in Ontario schools entered the novitiate of the Sisters of Providence in 1919, and as Sister Mary Evarista, devoted forty-nine years to the apostolate of the classroom. In 1926 a younger sister, Hildegarde, was admitted to the Congregation.

Hildegarde has left high school before graduation to take a business course and for five years held a responsible position as stenographer with a Belleville firm. So it was required no little generosity on her part to relinquish work that she found interesting and the material goods it could provide for her, and to sacrifice the joys of her home life to answer the call of Christ. I am sure, however, that she never throughout her forty-five years in the service of her Lord and Master regretted the choice she made to response to His choice of her.

After making profession as Sister Carmella, she completed her high school studies at Maryvale Abbey High School Glen Nevis, while helping with the care of pupil boarders, then took professional training at Ottawa Teachers’ College and for thirty-six years devoted her talents to the instruction of youth. She taught in several schools in Kingston archdiocese and spent her longest term at King, in Toronto archdiocese. Retiring from the classroom in 1968 she was stationed for three years at Sacred Heart Convent, Arnprior, rendering valuable assistance to the Sisters on that mission.

For a number of years she suffered from a distressing asthmatic condition, but in December 1970 she underwent surgery which gave her great relief in breathing, and she looked forward to a few years of improved health and opportunity for further service. The Lord ordained otherwise. The first week of March 1971 she was stricken with a severe heart attack, received the Last Sacraments, and Sister M. Thrasilla, Superior at Arnprior brought her to Hotel Dieu Kingston by ambulance. A few days later a stroke rendered her unconscious and almost completely paralyzed.

For several days she lay at death’s door, but then gradually she regained power of one side and gave signs of recognizing us when we visited her. It was a surprise; therefore, when at 5 a.m. on Holy Saturday, April 10, a phone call from Hotel Dieu told us that she had just died.

The remains were brought to Heathfield that evening at 5 and the Vigil Mass of the Resurrection was offered at 7.30 for the repose of her soul.

The five surviving members of her family, Mrs. Marie Sheridan, Mrs. K. Turcotte, Mrs. Eileen George, Mrs. Patricia McKay and Jim Boyle all came on Sunday and remained for the funeral along with several nieces and nephews.

The funeral Mass on Easter Monday was concelebrated by Msgr. Hanley, Vicar General, our chaplain Father Buckley and Msgr. Dillon, of Arnprior. Present for the Mass were Msgr. Farrell, Msgr. Bernard Walsh of St. Joseph’s, Kingston, Father G. O’Hearn of Perth, and Father Blake of Arnprior. The altar with its Easter decoration of lilies and roses, the beautiful white vestments, the joyful music and Msgr. Hanley’s homily stressed the triumph of the Risen Saviour in which we hope Sister Carmella is now participating.

It was not possible to have the grave ready for Monday morning, and the body was left in the chapel after Mass until 2 p.m. Father Buckley offered the prayers at the cemetery and the honorary pall bearers were Sister’s last Superior, Sister M. Thrasilla, her niece Sister Bernice Boyle and her two novitiate companions Sisters M. Francis of Assisi and Wilhelmina.