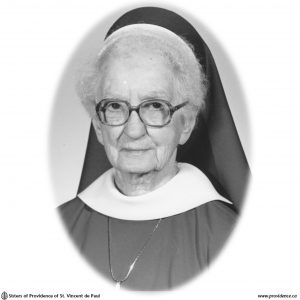 Mary Isabella Barrow was born on May 10, 1899 in Central Lake, Michigan USA, and what a long fruitful life she led. Her parents, Joseph Barrow and Rebecca (Ferguson), had nine other children, three more girls and six boys. Providence in the form of Sister’s grandmother Barrow brought her to Tweed, Ontario when she was nine years old. When Joseph Barrow’s father died his mother lived alone and dearly wanted a granddaughter to live with her. Isabelle was chosen, and although she was treated well and came to look upon Tweed as home, it must have been a great sacrifice for her to be separated from her parents and siblings, especially her brother, Joe, who was next to her in age and with whom she played every day. Both her father and mother had a difficult time letting their daughter go. Isabella’s grandmother lost no time in arranging to have her granddaughter baptized in the Catholic Church. Isabella’s mother was not a Catholic and her father was married outside of the church. It was a consolation to Sister that her father returned to the practice of his faith some years later and also that she became reacquainted with some members of her wonderful family.

When Isabella was thirteen she became a member of the church choir. Sister M. Hildegarde, recognizing her qualities asked if she thought she might some day become a Sister of Providence. At the age of nineteen Isabella, who attended daily Mass, remembered that question put to her six years earlier. Encouraged by her pastor, Father Quinn, she wrote to the Motherhouse in Kingston seeking admission to the congregation. When her grandmother found that she had done this without consulting her parents she insisted that they be made aware of Isabella’s intentions. Her uncle wanted to take Isabella to Michigan to see her family but she entered without doing so on August 14, 1919, the same day as Sister Mary Electa, who became her lifelong friend.

Chosen for the teaching profession, most of Sister Mary Carthagh’s forty-two years in the classroom saw her with very large classes of elementary pupils in Gananoque, Trenton, Smiths Falls, Kingston, Perth, Lancaster, Arnprior, Tweed and Belleville. Sister recalled these years as being the happiest of her life. When teaching Sister was allowed a week off to visit her mother who was ill. Her mother said she knew Isabella would come, and she died peacefully shortly after her daughter’s visit.

Elected to the General Council in 1965 for six years, as well as fulfilling her regular duties, Sister Mary Carthagh’s common sense approach was one of her greatest contributions while serving as a member of the Leadership Team. Later, she worked for eleven years in the sewing room at Heathfield. Sisters not only left her wearing a lovely new habit, but with a new appreciation of Sister’s serenity, gentleness and unfailing courtesy as well.

When Sister retired to Marian II she was, for many years, a favourite with the nursing staff. Despite considerable pain and discomfort, she welcomed all visitors warmly and continued to inspire all who knew her with her prayerful acceptance and quiet humour. She took seriously her mission to pray for the residents and staff at Yale House in Winnipeg. When she was able Sister Mary Carthagh enjoyed good music and card games with her Sisters. She continued to be a very precious presence in the community until her death on November 24, 1999, at the ripe and fruitful age of one hundred! A special party was held in her honour to celebrate this wonderful milestone in May of 1999. Shortly afterward Sister celebrated her Jubilee – eighty years of faithful response to God’s call. On this happy occasion Sister Joan Whittingham, General Superior, remarked on the fact that Sister Mary Carthagh lived in a spirit of simplicity, compassion and prayerfulness, truly witnessing to others how one can grow old gracefully.

Archbishop Francis Spence accompanied by several priests, presided at the Mass of Christian Burial on November 26, 1999. Unfortunately, the only surviving member of Sister’s immediate family, her sister Helen, was unable to attend the wake or funeral because her own dear husband passed away the very same day as Sister Mary Carthagh. However, two of Sister’s nieces, Isabel Spurr, accompanied by her husband Don, and Anna Farquhar were able to be present. The homily was given by Father C. Gazeley who remarked that Sister Mary Carthagh sought happiness through intimacy with God and through service to God’s people. A woman of deep prayer, Sister taught truth and virtue to her pupils through her example. She was a guardian angel to those fortunate children. Her message to them, and to us now is, “Become the best possible person you can be, the person God intends you to be.”

Sister Mary Carthagh is, no doubt, enjoying the reward of her many years of loving service in the embrace of her Loving God, and also with her deceased family members and friends, especially Sister Mary Electa and Sister Verna Plue, who preceded her into heaven. She will be missed and fondly remembered by those she leaves behind, especially the members of her religious congregation.