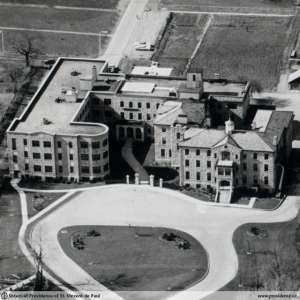 Sister Mary Casimir died at the Marian Infirmary, Providence Motherhouse, on December 9th after fifty-seven years of religious life. Sister was born in the parish of St. Patrick’s, Railton, Ontario, July 9, 1885 and baptized on August 2nd by Reverend Charles McWilliams. When she was quite young she suffered the loss of her mother, and in a few years her father re-married. The family situation, however, was a happy one for Mary Loretta and her half-sisters were devoted to her.

After elementary education in the local school, she took a business course at Kingston Business College, and worked for a short time in the city. In 1912, she entered the novitiate of the Sisters of Providence, and made profession two years later. She was assigned for short periods to St. Vincent de Paul Hospital, Brockville, and to St. John’s Convent, Gananoque, and the rest of her active life she spent in Kingston, either with the children at St. Mary’s of the Lake, Orphanage, or caring for the aged and infirm at the House of Providence. Although not of a frail constitution, she suffered in the late middle life a severe illness which left her an invalid for her last twenty-one years. Nine of these years she had to spend in the Kingston Psychiatric Hospital for treatment. But finally our prayers were answered and in 1958 she was able to return to the Community and was cared for in the infirmary until her death. After passing through the crucible of turmoil and mental anguish, she experienced for eleven years the tranquility and peace which were reflected in her face and voice as she waited for the Bridegroom to call her to eternal bliss. In 1964 she had the happiness of celebrating the Golden Anniversary of her profession.

Her funeral Mass was offered on December 12th in the Chapel of the Immaculate Conception at Heathfield by His Grace Archbishop Wilhelm assisted by Father Buckley, the community chaplain.

The only surviving member of her immediate family, a sister Mrs. Josephine Fisher of 23 Pine Street, Kingston, attended the funeral as well as several nieces and nephews from Kingston and Enterprise. The pall bearers were four nephews: Ossie Fisher, Arthur Taugher, Frank Murphy, and J. McNichols.