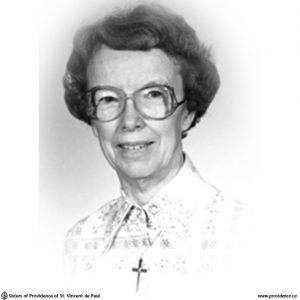 Catherine Doherty was born on October 22, 1914 in Buncrana County, Donegal, Ireland, the fourth child of eight children born to Patrick and Margaret (Porter) Doherty. The family left Ireland in 1925 and settled near Saskatoon, Saskatchewan on a 640 acre wheat and dairy farm. In the mid 1930’s the family moved to Vancouver. Catherine had a great sense of humour and kept her younger siblings entertained.

Catherine had met the Sisters of Providence of St. Vincent de Paul at Holy Family Hospital, Vancouver and eventually entered the novitiate on September 15, 1951. After her First Profession of Vows, she was missioned to Holy Family Hospital in Vancouver where she remained for fifteen years in the position of Finance and Hospital Administration. She then went to St. Mary’s Hospital in Camrose as accountant. While she was in Camrose she participated in a twenty-eight mile marathon for “Miles for Millions” where she raised a considerable amount of money thanks to the generosity of one of her sponsors. Following her happy days in Camrose, she went to St. Anthony’s Home in Moose Jaw as Administrator. While there she enjoyed going to football games in Regina and watching the “Snowbirds” perform. Her next assignment took her to the Father Dowd Memorial Home in Montreal as Administrator. After an all too brief time, as she described it, she returned to Holy Family Hospital in Vancouver as Administrator until she retired twelve years later. She then returned to the Motherhouse where she did some archival work. After a lengthy illness Sister Catherine was called home to her loving God on Wednesday, October 19, 2005.

Sister Catherine’s kindness, deep commitment to justice for the staff and her leadership qualities brought her deep respect and love from the many people she touched in her ministry of administration in the health care system. Her deep faith, Irish charm and joy-filled spirit endeared her to all who knew her.

The Mass of Christian Burial, held in the Chapel of Mary Mother of Compassion, Providence Motherhouse on October 22 was presided over by Most Rev. Francis J. Spence, Archbishop Emeritus of Kingston, assisted by members of the clergy. The homily was delivered by Archbishop Spence.