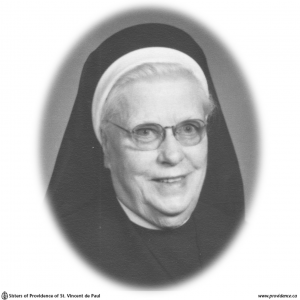 In the correspondence files of Mother Mary Clement, Superior General of the Sisters of Providence in the 1970’s, the following letter appears:

Here in historic old Quebec we have many precious treasures. Permit me to warn you that one of the most precious of these treasures will soon be confided to your good care.

Take her and keep her. Though we find it hard to let her go, we should find it harder to receive her back. Whom the dark clouds gather, hold her tightly until these same clouds turn to silver.

May her going and her staying bring (as did your own going and staying) glory to God, salvation to souls and merit to herself and to hers.

The treasure confided to Mother Mary Clement was Kathleen Dooley, a young woman of the Irish parish of Quebec City, St. Patrick’s, in the charge Redemptorist Fathers.

Kathleen, third of their four children, came to the Providence Community in 1924, and she stayed – for 56 one-half years.

After profession in 1926 as Sister Mary Catherine she was sent to the School of Nursing at St. Vincent de Paul Hospital, Brockville, and graduated in 1929. Yet not much of Sister’s long life was devoted to actual nursing service. Her high school education had included a Commercial Course, and it became apparent to her Superiors that she possessed marked acumen for business. So she was assigned the duties of treasurer and/or bursar in hospitals of Brockville, Moose Jaw, and St. Mary’s, Montreal.

Her initiative and unbounded energy led to her being sent as one of the pioneers to new and difficult missions; King City, in 1938, where Father Francis McGoey had established a rural settlement for Catholic families of Toronto who were suffering from the economic depression to enable them to recover by their own efforts, and where the Sisters endured all the primitive conditions of the people they were helping; Rosary Hall, Toronto, in 1939, a residence for business girls or students from outside the city, which was in need of efficient management and which Sister M. Catherine helped to put on its feet; Vancouver, in 1947, as one of the four Sisters who in a small villa on Argyle Avenue laid the foundation of Holy Family Hospital.

The following year, 1948, Sister undertook the final assignment which was to last until her retirement twenty-five years later. She was appointed bursar and purchasing agent at Providence Hospital, Moose Jaw, Saskatchewan.

During these 25 years the hospital progressed and expanded. In 1950 a new laboratory was built and an addition made to it in 1958. The same year a new laundry was set up. In 1962, the year of the hospital’s Golden Jubilee, a large wing was added and the former building completely renovated and modernized. All these improvement brought many extra duties and financial problems to the Bursar. At the Jubilee celebration, when the new wing was officially opened, the mayor of the city, recalling the difficulties and anxieties that had to be overcome in the project, said “Do not worry about the gales and storms, but did you bring your ship to port.” Sister M. Catherine must have played an important role as one of the crew who brought this ship to port.

By this time her health was declining and in 1968 the first indication of cancer appeared. After surgery she continued to work, and even for a brief period after a second operation in 1972. But then she decided that she would ask to be relieved of active hospital duties and in March, 1973, she retired to the Marian Infirmary.

She did not, however, remain idle here. She typed labels for the Altar Bread Department and gave special attention to Sister M. Raphael, who had been her companion in Moose Jaw for many years, praying with Sister and performing countless little acts of kindness which meant so much to an aged invalid.

In the fall of 1980 the dread cancer recurred and there followed weeks of intense suffering.  Special nurses cared for her day and night for two weeks and oxygen had to be given frequently. She remained conscious most of the time, praying the Rosary and repeating her favorite ejaculation, “God is so good.” At 10:00 a.m. on Dec. 30th, she passed peacefully away while prayers were being offered by Fr. McAvoy, Chaplain, Sr. Muriel, Superior General, Sr. Margaret Rose, Superior of the Infirmary, and several Sisters and secular nurses of the Infirmary Staff.

On January 2, His Grace Archbishop Wilhelm, was chief celebrant of the funeral Mass with Fr. P. McAvoy, chaplain, as co-celebrant. His Grace gave the homily.

The only surviving member of Sister’s immediate family is a sister, Mrs. Eileen McGillicuddy, who is a patient in a nursing home in Montreal. Mrs. McGillicuddy’s daughter-in-law with her son came for the funeral.

Sister Mary Catherine was a faithful daughter of St. Vincent de Paul. The following words from Calvet’s biography of St. Vincent could be applied to her:

“His was a spirituality clearly shaped for action. We have but to serve God as His instruments, His co-labourers. The workman must employ his whole time to his work, doing it to the best of his ability, with readiness to seize every opportunity whereby God indicates His will. This activity for God can only be obtained in and through love, and man is educated in love by prayer. Keeping to himself the ultimate secret of the love which governed his words and acts, he appeared to us as simple, lucid, sensible and business-like.”

That Sister M. Catherine throughout her busy life had taken time to become educated in love by prayer was evidenced by the ease with which she left the activity of the hospital and adjusted to the quiet contemplative life of the Motherhouse Infirmary, and like St. Vincent, she remained clear-headed and warm-hearted to the last.