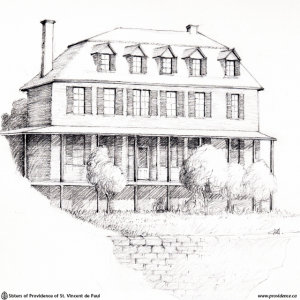 It was the will of God to visit our Community with a heavy trial on January 29th, 1887, by calling to join the ranks of the blessed, a fervent and zealous member, in the person of Sister Mary Catherine. Fiat Voluntas Dei !!!

Mary Doyle, born in Ireland, immigrated to America while still young and located with other members of her family in Massachusetts. At the age of twenty-one she offered herself as a candidate for the life of a Sister of Charity and entered amongst us July, 1877. She faithfully corresponded to the special graces afforded her in the sequestered sanctuary of religion. Nothing extraordinary came into her experience, as sometimes happens in lives consecrated to God, she ever respected the motto of “Performing uncommonly well the common duties of every day,” and by her fervor, charity and patience she gave great edification to her religious companions. She loved and served the sick with utmost tenderness and devotion, besides she had a special interest in the orphans and the most of her time in religion was spent in caring for Christ’s little ones. It was solely with a view to promote the interests of these neglected children, so dear to the Heart of Jesus, that our loved young Sister voluntarily engaged in a questing mission in the far West. However, the fireside picture of the adventures and heroisms of soliciting alms in a foreign land, lost much of its brilliancy when the reality was met face to face. Unexpected and countless difficulties beset our zealous workers and forced them to abandon the worthy project and return home.

Very soon her health began visibly to decline, and the gradual progress of that fatal disease to which she was predisposed could not long be arrested by the tender care and watchfulness of Superiors and Sisters who would fain have purchased her restoration to health at any cost. The prospect of her approaching end did not alarm her, but God to whom she had consecrated her young life, accepted the ardent desires of her pure heart and called His faithful spouse to His celestial banquet on January 29, 1887. Thus ended the earthly career of an earnest and pious young religious whose life not only merited, but manifested to her co-labourers, her worthiness to all that is contained in the Divine promise: “Be thou faithful unto death and I will give to thee the crown of Life.”