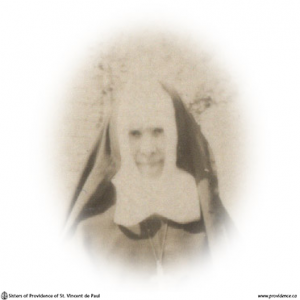 Sister Mary Catherine O’Connor, was born Ireland, March 1, 1860. At the age of twenty-five years she entered our Novitiate from Holyoke, Mass. on May 5, 1885.

Proving herself very earnest, faithful and generous, she was advanced to the Reception of the Holy Habit January 4, 1886 and to Holy Profession June 29, 1887.

After her Profession she was employed in the different Offices, principally in the Kitchen and Dispensary.  In July 1889 she was given charge of the Dispensry. The following year February 1890 she was sent to Holyoke, Mass. At first she was engaged in the schools in the city, later she was transferred to Mount St. Vincent where she spent two years.

At the time of the secession of that mission from the Mother House, she, retaining a filial attachment to the Home that nurtured her, returned to Kingston with the other Sisters August 1892.

At first she was employed as companion to the visiting Sister, and also to the Sister charged with the Cathedral Sacristy. She also took up the study of Pharmacy. The next year she spent in the pharmacy in the hospital, Brockville. Recalled to the Mother House she was given charge of Sacristan at the Cathedral and Visitor of the General Hospital and the Jail. At the end of two years she was named for the Pharmacy and Garden. She also devoted her extra time to fancy work. Her delight was to embroider pieces for use of the altar, which she did perfectly.

In April 1905 she was again appointed pharmacist at St. Vincent de Paul Hospital, Brockville. Three years later in August 1908 she was named assistant to the General Treasurer at the Mother House. In July 1913 she returned to St. Vincent de Paul Hospital having been appointed secretary for that mission. At the end of four years in November 1917 she was named Local Superior of St. John’s Convent, Perth. At the end of her term of office, she was again recalled to the Mother House being elected Fourth Assistant to the Superior General, which office she held for three years until July 1924.

For years Sister suffered (though it was not generally known) from a small opening or sore under her breast, it was supposed to be tubercular. She said little about it, kept dressing on it as she found necessary. In 1925 it began to give more trouble, her general health began to fail. She continued to go around attending light duties until the autumn of 1925, she began to suffer extremely. She had to give up.

On October 3rd. she asked for the Confessor, Reverend Father Kennedy C.S.S.R. Brockville. He came up at midnight, but she feeling better, put off being anointed.  However, the following week on Father’s next visit October 10th she received the Last Sacraments. She continued to suffer very great pain. It was discovered her ailment was malignant. She lingered on through the month and into November. She died at 2.30 p.m. Tuesday November 27, 1925.

His Grace advised, owing to fear of contagion, having the funeral the next day. The Funeral Mass a Solemn Requiem was celebrated by Reverent A.J. Hanley assisted by Reverend F.D. Hyland and Rev. R.J. Coyle.