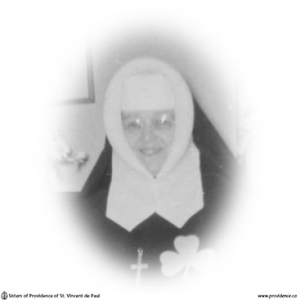 Sister Mary Cecile, the former Kathleen Cecilia Koster, was born in Toronto on November 12, 1893, daughter of Matthew Koster and Catherine McDonnell. She was educated at Sr. Patrick’s School and St. Joseph’s Convent.

Although Cecilia (or Cecile as she was called) felt called to religious life, it was many years before she was free to answer that call. Her father while comparatively young was stricken with Paralysis Agitans and was an invalid for twenty years. Her sister, Marie, at an early age was left a widow with five little children – the father died of pneumonia and the young family was taken care of at the Koster home for a few years.

The two Koster boys were studying. Gerald the elder,  in the Redemptorist seminary and Basil at Medical School. Cecile remained at home the mainstay of her mother.

By 1933, Mr. Koster had died; Gerald was now a Redemptorist Missionary, Basil a practicing surgeon, and Marie in a home of her own. Cecile was now free to follow her own vocation. She entered the Novitiate of the Sisters of Providence and was professed in 1935 as Sister Mary Cecile.

Before pronouncing her final vow in 1938, one more sacrifice was required of her. Just when she was looking forward to her first visit home, her devoted mother was called suddenly by death.

For thirty-two years her religious life was one of more than ordinary activity. With a good business education, talented in needlework, naturally artistic and trained and experienced in dramatic work, she filled with competence many offices in the Community.

For four years she was Directress of Pupil Boarders at Maryvale Abbey, Glen Nevis, Ontario. She spent fourteen years at Rosary Hall, Toronto, eight years in charge of the business office and six as Local Superior. For six years she served as Local Superior at St. Anthony’s Home, Moose Jaw, and the monuments to her at that Institution are the beautiful chapel and the landscaped grounds.

In 1962 she was appointed Local Superior of St. Francis Hospital, Smiths Falls, but before the completion of her first term of three years, crippling arthritis had claimed her as a victim, and she was obliged to retire in 1965 to the infirmary at the Mother House. In spite of almost continuous suffering, which was gradually aggravated over seven years, she continued to follow the spiritual exercises of the Community and attended Mass in a wheelchair until a month before her death.

On March 27th she was taken by ambulance to Hotel Dieu and placed on oxygen in an attempt to give her some relief. Very little could be done for her, however, and for three weeks she suffered intensely. Her brother, Dr. Koster and his wife were almost constantly at her bedside and the Sisters visited her frequently. These visits gave her consolation as in spite of extreme weakness her mental faculties remained alert.

On April 17th at 5.30 a.m., she was freed from earthly suffering, and surely her self-sacrificing life and the long years of pain which she strove – not always successfully, it is true – to bear with patience earned for her a speedy release from Purgatory.

Her funeral Mass on April 19th was concelebrated by Monsignor J.G. Hanley and Monsignor Bernard Walsh, assisted by Father Cyril Smetana, O.S.A., who was conducting our retreat.

At the funeral along with Dr. and Mrs. Koster and their son Gerry, were four members of Marie’s family – Neil and Gerald McLellan of Toronto, Mrs. Kathleen Bannon of Oakville and Mrs. Mary Halloran of Niagara Falls. Father Gerald Koster and Mrs. Marie McLellan had predeceased her.

Over and above Sister Mary Cecile’s many services for the Community, will be remembered her warm charity and consideration for the sick and the aged especially among the Sisters and her intense life of prayer.