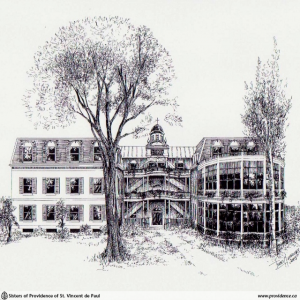 The Archives does not have a copy of a necrology for Sister Mary Cecilia. The following summary was compiled by Archives staff.

Sarah Staley was born on May 24, 1875 to Daniel Staley and Sarah Spoor on Wolfe Island Ontario. On October 6, 1895, Sarah entered the Novitiate of the Sisters of Providence of St. Vincent de Paul. She was given the name Sr. Mary Cecilia upon taking her first vows on December 7, 1897. Upon leaving the novitiate she worked in the Men’s ward at St. Vincent de Paul Hospital in Brockville, and helped with home nursing in various Eastern Ontario towns. She soon found her calling in playing the organ, teaching music and leading choirs, while also helping with the sick, and the orphans. She served in numerous missions including St. Vincent de Paul Hospital, Brockville; the House of Providence, Kingston; St. John’s Convent, Perth; and St. Mark’s Convent, Prescott.

Sr. Mary Cecilia was seriously ill for at least nine months before her death. On November 15, 1912, Sr. Mary Cecilia passed away at the House of Providence with her three brothers at her side. The following excerpt is taken from the Congregational Annals:

“November 15, 1912 – Community Mass by chaplain. One later by Fr. Arthur Staley. After breakfast he goes to the infirmary to see Sr. Mary Cecelia whom he finds much weaker than before. Later in the day they are all three [brothers] summoned to her bedside. Many others of the relatives are there. Sister spoke some kind words to them and in a short time sent for Sr. Mary Basil who raised her up a little. Then composing herself asked if everything ready, then breathed away peacefully amidst the prayers and tears of those who loved her. Besides her three brothers three other priests who in turn kept giving absolution until her pure soul had departed from the body. Rev. Mother Gabriel and as many of the Sisters who could find room beside her, prayed with great fervor until she died. Then prayers for the repose of her soul were said.”

“Funeral Mass by Rev. Fr. Arthur Staley assisted by Rev. Louis and Rev. Melville Staley. His Grace Archbishop Spratt and a number of priests in the sanctuary. Rev. T.P. O’Brien and Rev. Fr. Halligan helped in the choir, singing was grand. After Mass His Grace assisted by Rev. Frs. Staley intoned the Libera, choir responding, then procession formed and remains conveyed to the hearse. Priests and Sisters with lighted tapers saying Miserere and De Profundis. Meantime the funeral procession started for St. Mary’s Cemetery, leaving the celebrant who had come to dining room for some refreshment and his two brothers who accompanied him, quickly they procure auto in a short time hurry on to reach the cemetery before prayers were recited.”