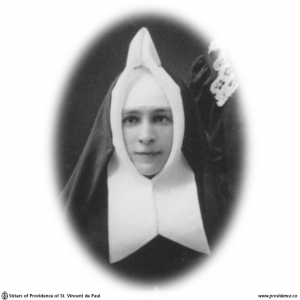 In 1904 Sister entered the preparatory Novitiate at the House of Providence, to begin her religious training. After completing her Novitiate term she made profession. Sister’s first appointment was to St. Vincent de Paul’s Hospital, Brockville, where she took up the study of nursing.

As a nurse, Sister M. Celestine was most capable and successful in her profession and gave many useful years of devoted service to the care of the sick at St. Vincent’s and St. Francis hospitals. She contacted typhoid fever in Smiths Falls, after which she returned to Kingston to recuperate. Sister’s next appointment was to the Women’s Ward at the House of Providence. In her care of the poor and infirm she was regarded as an angel of mercy for her charity and sweet gentle forbearance.

During an epidemic of “flu” among her charges, Sister contracted the disease. Her case was serious for some time, but then a change for the better took place. She continued to improve in health and felt so well she spoke of returning to work, but God ordained otherwise. While engaged in writing a letter, our faithful Sister suffered a cerebral haemorrhage to which she succumbed in a few days. She was survived by her sister, Mother M. Victoria, a member of the General Council, at the Mother House.