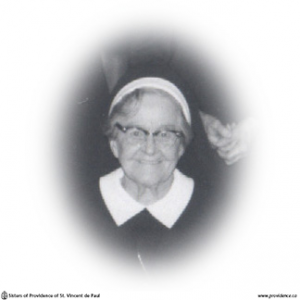 Sister Mary Celine died December 18, 1980, at St. Mary’s of the Lake Hospital, Kingston. Sister was born on November 25, 1893. Her father, Joseph Nagle, was a life-long member of St. John’s Parish, Perth, Ontario, and her mother, Margaret Anne Salmon, a member of St. Francis de Sales, Smiths Falls. Joseph died in 1904 and with the death of his wife four years later, the home was broken up. Mary, (later to be Sister M. Celine) was given a home by her mother’s sister, Mrs. Therese McDonald, who with her husband, Patrick, made every possible effort to supply the parental care and affection that was now lacking in their niece.

After finishing school in Perth, Mary went to Ottawa where she worked for a few years in a dental office. During this time she assisted at Mass daily in St. Joseph’s Church, and the pastor, Father Edmund Cornell, O.M.I., recommended her highly as a candidate for our novitiate.

On August, 1916, she enrolled as a postulant and was trained in the practice of religious life by Sister Mary Austin, the esteemed directress of novices for almost 20 years.

After profession in 1918 she was assigned to Providence Hospital, Moose Jaw, where a School of Nursing had recently been established. Here under the direction of the Superior, Sister M. Eulalia, a former Superintendent of Nurses in Brockville, and of Sr. M. Raphael, Superintendent at Moose Jaw, Sister Mary Celine received the training which was to make her the efficient graduate nurse who cared for the sick in various institutions of the community for a quarter of a century.  Her appointments included: St. Francis Hospital, Smiths Falls, St. Vincent de Paul, Brockville, St. Mary’s of the Lake and Providence Manor, Kingston, and St. Joseph’s Vocational School for Boys in Winnipeg.

By this time her health, physical and emotional, was seriously impaired and she required a year of exclaustration for rehabilitation. On her return to the Motherhouse in 1953, she kept active for about 10 years in the Altar Bread Department. Then two accidents, resulting in fractures of both shoulders and arthritis in the knees, necessitated care in the infirmary. Still she persisted in getting around with the aid of a walker, and assisting at Mass daily in the Infirmary Chapel.

In early November, 1980, she fell for the third time and suffered a fractured pelvis which caused intense pain. After three weeks in Hotel Dieu, where little could be done for her, she was transferred to St. Mary’s of the Lake. At the age of 87, her heart could not hold out longer. A severe coronary brought her to death’s door, and although she rallied for a week or so, another attack proved fatal.

On the afternoon of December 18 our Superior General, Sister Muriel, visited her and Sister was able to converse with her.  But at 8:00 p.m., a message came to the Motherhouse that Sister Mary Celine was dying. Sr. Muriel, Sister M. Teresa, General Assistant, Sister M. Lenore, former Superior General, and three other Sisters went immediately to the Lake but Sister had expired before they reached her bedside.

Sister M. Celine had no survivors of her immediate family. A sister, Mrs. Rose Cameron, of Calgary, and two brothers Tom and Ambrose Nagle, of Ottawa and London respectively, predeceased her. A number of cousins, including Sister Marily Mangan and Sister Bernadette O’Neill, both members of the Congregation of Notre Dame, with their families were present for the wake and funeral. A first cousin, Monsignor J.A. O’Neill, parish priest of Lynn, Ontario, was absent in Florida. Two other first cousins, Father Michael Nagle, C.M., and Father John Nagle, of Detroit, died within the past two years.

Sister Mary Celine was a perfectionist in her work and this quality tended to make her critical of all who did not measure up to her standard, whether of nursing or sacristan’s duties or housekeeping. She was indefatigable to every work assigned her, and generous in helping all who needed assistance, and so she looked for generosity in the part of others when she became unable to do everything for herself; consequently she was a rather demanding patient in the infirmary.

But she was faithful to prayer, and this fidelity along with self-sacrificing service to all in need surely covered a multitude of faults, and merited (if we can dare say so) the consolations she was granted in her last moments. For she received, a few hours before her death, while fully conscious, the Sacraments of the Sick and Holy Viaticum and she was supported by the prayers of the chaplain of the Sisters of St. Mary’s Hospital.

So we hope that these blessings were a foretaste of those she has already received from a merciful Judge, who said that not even a cup of water given in His name would be unrewarded.