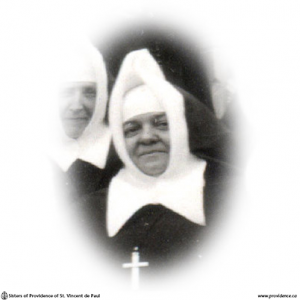 On June 17, 1938, Sister Mary Charles (Odile Poulin) passed away at the House of Providence, Kingston.

Sister spent most of her religious life at the Mother House, and was employed in offices of responsibility for which she was particularly adapted. She served for some years on the General Council and for six years as Local Superior of St. Mark’s Convent, Prescott.

Sister was endowed with noble traits of mind and heart. She was an outstanding personality, capable and noted for exactness and perfection in her work, which was shown to advantage in her charge of the costume room for many years.

She was seized with a stroke of paralysis and suffered a lingering illness, cheerfully borne, for fifteen months.

Death came suddenly at the last, on the afternoon of June 17.