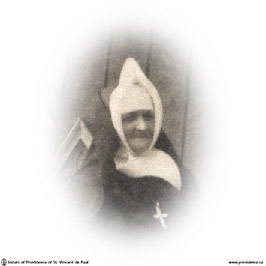 Sister Mary Christina died at noon on Monday, November 7th, in the Marian Infirmary, “Heathfield” where she had been a patient since the opening in September 1954.

Mary Philomena Roberts was born in Mount Pleasant, Michigan, Mass., the daughter of Mr. Thomas Roberts and Catherine Dixon, and lived in Michigan until 1901 when she came to the House of Providence, Kingston. She had been a member of the Third Order (Tertiaries) until she was admitted to the Novitiate in 1908.

Until illness obliged her to give up active duties about six years ago, Sister’s entire religious life had been devoted to the care of the aged at the House of Providence. In the early days when “Lourdes” housed the most difficult cases, she had charge of the old women sent to the ward. Her kindness was proverbial. For Sister M. Christina no sacrifice was too great in relieving their wants. Her charity extended to all as the suffering members of Christ; it was her greatest happiness to be with them and to single out the most destitute for her special care.

Of a frail constitution and weak lungs, Sister was at one time ordered a period of rest to regain her health, but she soon got weary of the “rest cure” and asked the doctor to let her go back to work or she would die, so he let her go to work, and she continued many long years after that to care for the sick.

During her last years she suffered from loss of memory which was a great trial for her, but she never forgot how to answer the prayers or say pious ejaculations. Toward the end she was heard to repeat frequently the prayer “Into Thy hands, O Lord, I commend my spirit, Lord Jesus receive my soul”. As the Angelus rang, she passed peacefully away with the Sisters assisting at her bedside in prayer.

Solemn Requiem Mass was offered Wednesday at 9 o’clock in the morning, at the Mother House here. His Grace Archbishop O’Sullivan assisted at the throne, with Msgr. O’Sullivan and Msgr. Hanley in attendance, and sang the Libera. The Mass was sung by Father Flurey, chaplain, with Father Hendrix as deacon and Father Spence as subdeacon.

Present at the Mass also were Father Ainslie, Father Gelinik and Father Lynett. Father Flurey said the prayers at the grave.

Of her immediate relative none of her family survive. She has nieces and cousins living in Michigan. R.I.P.

Sister had spent fifty four years in religion. May her soul rest in peace!

Mary Roberts entered the congregation as a Tertiary Sister in 1901 and was known as Sr. Christina. Tertiaries were auxiliaries who performed domestic labour and were part of the Congregation from 1895 to 1907, when the program was phased out and they were invited to enter the novitiate. She entered the Novitiate on November 21 1907.