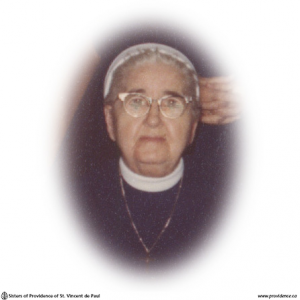 Our Blessed Lady’s birthday, September 8, commemorates two events which we believe were not mere coincidences. On that day in 1980 Sister Mary Chrysostom, aged 90 years, died after a long illness at St. Mary’s of the Lake Hospital, Kingston. On that day in 1936 her sister, Sister Mary Ethelreda, at the age of 43, died after a brief illness at St. Vincent de Paul Hospital, Brockville.

These two sisters were, in the words of their pastor, Father O’Rourke, “brought up carefully by good Catholic parents”, Patrick and Marie (Hagan) McCann, in that fervent Irish parish of Westport, Ontario.

Patrick McCann died in middle life leaving his wife with five children, all but two still in school. Fortunately Westport was one of three parishes in Ontario which enjoyed a complete Catholic school system recognized by the government, and so the McCann family received their education, primary and secondary, under the direction of the Sisters of the Congregation of Notre Dame. As they were blessed with talent for music they were trained in that art and three of them became proficient at the piano.

The influence of Catholic training at home and at school was a factor under God in fostering vocations to the religious life in the two daughters who became Sisters of Providence.

Mary Veronica (Maisie) entered the novitiate in 1917 and made profession in 1919 as Sister Mary Chrysostom.

The following year she spent at Ottawa Teachers’ College and devoted the next thirty-eight years to the apostolate of the classroom. She taught in various parishes in her home diocese and for seven years at Arnprior in Pembroke diocese. Her longest term of service, fifteen years, was in Tweed, where she was principal and for six of these years was as well Local Superior of St. Carthagh’s Convent. She was remarkably successful as a Grade VIII teacher and as director of dramas for which role her musical talent was an asset.

After retiring from teaching in 1958, she spent eighteen years at St. Mary’s of the Lake Hospital, Kingston. Here she rendered valuable service as Assistant, for a term, to the Superior; as hostess for various auxiliary groups visiting the hospital; as relief at the switchboard; and as an aide in the rehabilitation of the patients by playing the piano for them.

In 1975 after a severe heart attack her health declined to such a degree that she retired to the Motherhouse Infirmary. For four year and a half years she continued reasonably active, following the religious exercises of the Community (including the choir) and giving pleasure to her companions by her talent at the piano.

During her last year she complained of a sore throat and her lovely clear voice became husky and harsh. Doctors found a web in the esophagus for which medical treatment was of no avail. Soon it was impossible for anyone to understand what she was trying to say. Since her hearing and mental faculties were unimpaired, and she was an outgoing person who loved to have her sisters visit her, we can imagine the frustration she must have experienced at her inability to speak. Finally she could no longer swallow solid food and it was necessary to have her admitted to St. Mary’s of the Lake on February 7, 1980.

The funeral Mass was celebrated on Sept. 10 by His Grace Archbishop Wilhelm, with concelebrants Father Rowell of Westport, Father Stitt, and Fathers Paul McAvoy and Dan Ryan, chaplains at Heathfield.

The joyful notes of the Sisters’ choirs, with Sister Patricia Ann’s beautiful solo “How Great Thou Art”, was a fitting tribute to one whose soul took delight in music.

Father Stitt wrote the following commentary on the closing days of Sister’s life:

“I am very pleased to have the opportunity to share my reflections with you on the death of Sister Mary Chrysostom. During the last seven months of her life with us here at St. Mary’s of the Lake Hospital, Sister, although paralyzed in the throat and unable to verbalize, spoke eloquently by the way she lived and died. Sustained by her belief in the Resurrection and her devotion to the Mother of God, Sister eagerly awaited and prayed for her reward of everlasting life. Sister’s desire for the Eucharist was particularly inspiring. It was extremely difficult for her to swallow even the smallest particle of the Host; yet she was determined to receive Communion with her sisters gathered around her. On every occasion Sister taught us how precious is the gift we receive daily, which for most of us requires very little effort. During the last two weeks of her earthly life Sister could not receive the Host at all. However, she was nourished by the Blood of Christ administered to her by means of an eye-dropper. Her communion with the Lord brought her instant peace and joy. The twinkle in her eye said it all.”

She needs no further eulogy.