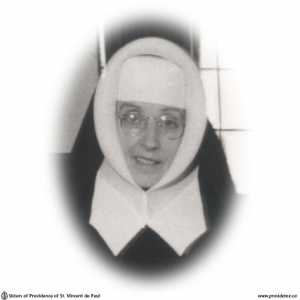 Mary Jane Macdonald, daughter of Archibald Macdonald and Clara Angela McPhail, both descendants of Glengarry pioneers, was born in Prescott on December 2, 1892 and baptized five days later in St. Mark’s Church by Reverend F. J. Hartigan. A grand-uncle, Dean O’Connor, was one of the early priests of Kingston diocese.

Mary Jane completed her elementary education at St. Mark’s School where her Grade VIII teacher was Sister (later Mother) Ursula. In High School she followed a commercial course and after graduation obtained a position in a bank in Montreal.

During a mission preached by the Paulist Fathers she was inspired with the thought of becoming a religious, although the missionaries had said little, if anything, regarding religious life.

Her first attempts to find the place God had destined for her were not too successful. She applied first to the Congregation of Notre Dame and was accepted; but after two weeks she was so overcome with homesickness that she left. She next tried the Holy Cross Novitiate and remained for nine months. She found speaking and studying in French extremely difficult and once again she returned to the world. But she always believed that God was calling her to religious life and she felt a strong desire to live in intimate union with Him, and a strong reluctance to (as she put it) contemplate spending her life where she would hear little or nothing of God except on Sundays.

Accordingly she decided to make a third attempt and in September 1923 she applied for admission to Providence novitiate. As all her references were satisfactory, the chaplain of Holy Cross novitiate wrote: “She is entirely worthy of your confidence.”; she was accepted. Here, as Sister Mary Clara, she found the peace and happiness which she had been seeking and which continued throughout fifty years of life as a Sister of Providence.

Because of her training and experience in the world of business she was assigned to office work in different houses of the Institute: the Mother House at Heathfield; St. Vincent de Paul Hospital, Brockville, Providence Manor – Kingston; Father Dowd Memorial Home, Montreal; St. Joseph’s Convent, Belleville. She also served for six years as Local Superior of St. Mary’s Orphanage, Kingston.

In the fall of 1971 she was obliged to undergo surgery, and although she was able to return to her mission in Belleville, the prognosis was not good. Her Superiors, therefore, were not surprised when her trouble recurred in the summer of 1973. This time the doctors told her that she was suffering from inoperable cancer and her life expectancy was not many weeks. She received the report with calm resignation, and spent these last few weeks in quiet preparation for her last call from God.

Her suffering was intense, but her patience was extraordinary. And her death on July 30 was a most consoling one. Sister Grace Maguire, General Assistant; Sister Mary Alban and Sister Margaret Rose Fardella – infirmarians; Sister Joan of Arc – who had been keeping long vigils with her – Sister Gaffney of Hotel Dieu; and Father D. Clement and Father M. Farrell were all praying at her bedside.

Sister Mary Clara will be remembered for her quiet sense of humour as well as her deep spirit of prayer and fervent religious life.