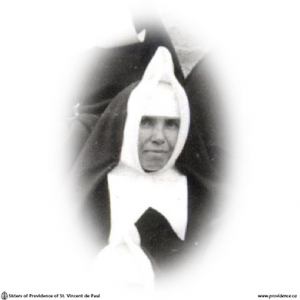 When our Community was asked to open a teaching mission in St. John’s Convent, Perth, it was remarked that, in all probability it would be the means of obtaining many worthy subjects, as there was a large Catholic congregation in the town, many Catholics in the country, and also in the surrounding parishes.

The first applicant for admission was a young teacher (Miss Agnes Mary Cunningham) the subject of our sketch.

During the first summer vacation while calling on the Sisters, she manifested much interest in hearing of our life, etc. Her parents lived in the town, but she was teaching several miles out in the country. Before the year had expired she came again asking advice how to proceed to obtain admission into our Community. Receiving instruction she wrote and obtained her entrance on Dec. 13, 1893, and entered our Novitiate on January 6, 1894.

Manifesting a cheerful willing spirit and careful to learn what was required of her, she was employed like her companions for some months, in work here and there, in the different offices as she was directed. Later, she taught the Novices during their class-hours, and also assisted Sisters who were preparing for examinations.

She was advanced to the Holy Habit at the end of six months on July 19, 1894. In January 1895 she was named for one of the classes at St. Mary’s School, but before the end of the year, taking seriously ill with erysipelas in the head, another Sister had to take her place.

She made Holy Profession January 4, 1896, and in September of the following year she was appointed teacher of the Entrance Class in St. John’s School, Perth. From that time it may be said her life work began. She taught in the greater number of our missions, in Perth, Brockville, Trenton, Chesterville, Gananoque, and lastly in St. John’s School, Kingston. In all she spent thirty-two years teaching in the Community.

She was very exact observer of rule, very particular about her personal appearance, and as far as it was possible kept her pupils and class-room in perfect order as regards neatness and cleanliness. For the good she may happily have accomplished, we shall now hope, she is enjoying a rich reward.

In the morning of Friday May 11, 1928, while teaching at St. John’s School, Kingston, she took very ill. A taxi was hastily called. She came home and went to bed. Dr. Fergus O’Connor came at once. He was much alarmed at her condition, and said it was a bad case of “flu”. When he made his visit the second day, he advised having her anointed without delay as he considered her case very critical. Another doctor being called, he quite agreed that there was little or no hope of recovery. She received the Last Sacraments, and although peaceful and resigned, expressed the wish that she would like to live a little longer if it was God’s Will for the sake of her Sister who was unable to care for herself.

She grew weaker each day; still she lived on during the week and the following week. She was so very low that the chaplain remained over, expecting he would be called at any moment. The obituary notices were being prepared. On Monday May 28, to the surprise of everyone she began to revive. The doctor coming in shortly after could not understand. He expected to learn she had gone.

She was a long time recovering, but eventually she did recover her normal health. She went to Brockville in the beginning of the next year for a change. After some time she was able to aid in the Secretary’s office. In September 1930 she was appointed secretary at St. Mary’s of the Lake, an office which she held until the time of her death.

On Feb. 27, 1932, a message was received from St. Mary’s of the Lake that Sister Mary Clare was again very ill with the “flu” and was going to be anointed. Doctor O’Connor was attending her. He said there was little or no prospect of her recovery this time, but owing to past experience he would not pronounce judgment, the ninth day would decide. Sunday March 6, Rev. Father Farrell was called at 3 o’clock in the morning. He came out from the palace, gave her Holy Communion, and remained until after his Mass. Returning at 11 o’clock he said all the prayers again and gave the last Blessing. At 1.30 o’clock she said she would like to make profession of faith and ask pardon of the Community according to our regulations, this having been overlooked at the time she was anointed. Having done this, she turned, and became unconscious. At 2 p.m. Mar. 6, 1932, all was over – she was with her God.

Requiem High Mass was offered in the Chapel the next morning, singing by the Orphans, after which the remains were transferred to the Mother House.

The funeral Mass – a solemn Pontifical Requiem was offered on Tuesday March 8 by His Excellency Most Rev. M.J. O’Brien assisted by Rev. Father Feeney, Father LeSage, Father Farrell, Rev. Dr. Byrne and Father Gerald Hanley, after which the remains were placed in the vault and interred on April 20.