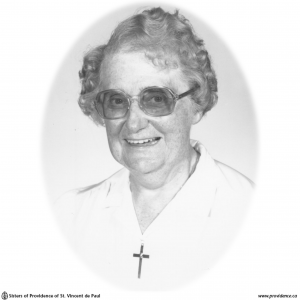 Stella Mary Doran was born in Belleville, Ontario, the eldest child of Elizabeth (Ford) and William Doran. She was to have five brothers, two of whom, (Charles and John) were still living at the time of her death. In 1944, her brother, Arthur (Art), who was three years younger than Stella, was to give his young life in W.W.II. His plane was shot down and he was buried with his crew of seven near Paris, France. Stella received her primary and secondary education at St. Michael’s Academy and was influenced by the Sisters of Providence who taught there. Stella decided to enter the congregation and did so on August 15, 1931, at the tender age of sixteen. She pronounced her vows two years later, taking the name of Sister Mary Clare. Following her first profession, Sister Mary Clare attended Maryvale Abbey in Glen Nevis.

Sister studied to be a nurse and graduated in 1939 from St. Vincent de Paul Hospital School of Nursing in Brockville. She spent the greater part of her nursing career as an Operating Room Supervisor in the hospital. Sister Mary Clare also spent two years as the supervisor of a medical surgical floor at St. Mary’s Hospital, Montreal before being missioned to Camrose, Alberta, in 1957, where she continued as Supervisor of the Operating Room at St. Mary’s Hospital. She returned to Ontario long enough to enroll in the Hospital Organization and Management course offered at the University of Toronto. Upon graduating in 1959, Sr. M. Clare was appointed Supervisor/Administrator of St. Mary’s Hospital in Camrose, a position she held for six years. While in Camrose, Sr. M. Clare was a member of the Alberta Catholic Conference, holding the position of President from 1960 to 1962.

In August, 1965, Sister was appointed Supervisor/Administrator of the Holy Family Hospital, Vancouver, where she remained for nine years. Here, she became a member of the B.C. Catholic Conference and was elected President on 1966. As a delegate for this Body, she had the privilege of attending the 18th Biennial Congress of the International Hospital Federation held in Montreal, Quebec. During her term as administrator she was accepted as a member of the American College of Health Service Executives. While in Vancouver, Sister M. Clare strove to have the hospital expanded to a three story facility which would increase the number of beds from fifty-two to two hundred and thirty-two. Sister Mary Clare was to see her dream approach

realization, but she would not remain long enough to enjoy the newly renovated facilities. The beginning of construction ceremonies were bittersweet because this “great lady” as she was called by the medical coordinator, Dr. Feldman, was leaving them to become Administrator of St. Joseph’s Hospital in Edmonton, Alberta where she would serve for six years.

In 1980 Sister became the Superior, and Coordinator of Pastoral Care at St. Mary’s of the Lake Hospital, Kingston, Ontario. She was a member of the working committee on the evaluative Criteria Program which was introduced at St. Mary’s at the time. Although Sister M. Clare suffered from Parkinson’s disease, she lived a very active, full, and responsible life. Everywhere she went people were impressed by her ability to take charge and get things done.

In 1987, Sister Mary Clare was granted a Sabbatical year. She enrolled in the Credo Program at Gonzaga University in Spokane, Michigan. As part of the program she was able to visit the Holy Land. This guided tour was a highlight in her life.

For a short time following her sabbatical, Sister was Director of Gabriel Home, a facility for unwed mothers. However, she felt that she was better qualified for Pastoral care work and she was re-assigned to a part-time position at Providence Manor. Sister visited the residents at the Manor as long as she possibly could. When no longer able to go out, she prayed daily for them, as well as for her family whom she loved dearly.

In 1991, Sister celebrated her Diamond Jubilee. After a very long and active career in the Healthcare field, Sister finally slowed down and accepted to be missioned as ‘pray-er’ for Providence Hospital, Moose Jaw. As in the past Sister took this new responsibility very seriously and she remarked that she valued this assignment very much.

At Sister’s Vigil Service, several relatives, Sisters and friends shared stories of Sister’s life, and remarked on her generosity, her interest in their lives and how much they would miss her. Sister will be remembered for her perseverance and her great service to the sick and elderly. She knew that the Parkinson’s disease would eventually slow her down, so she gave her all and accomplished as much as possible while she was able. Sister also knew the importance of living a balanced life and she did take time out to go camping with her family, to play cards and to become a formidable bowler. She loved to spend time at the cottage on Howe Island.

Sister Mary Clare died on December 23, 1995, in the 64th year of her religious life. Rev. Msgr. T.J. Raby, accompanied by several priests, presided at the Funeral Liturgy on December 27 in the Chapel of Mary Mother of compassion, Providence Motherhouse and delivered the homily. He said that just as Mary gave Jesus to the world at the first Christmas, so Sister Mary Clare in answering the call to religious life was invited to give the life of Jesus to the World in a special way. Sister Mary Clare said her own ‘Fiat’ and was faithful to that promise all her life in times of pain and conflict, as well as in times of joy. He invited Sister’s relatives, Sisters in religion and other friends, to celebrate Sister’s life by thanking God for her gifts, and for the generosity with which she used them.