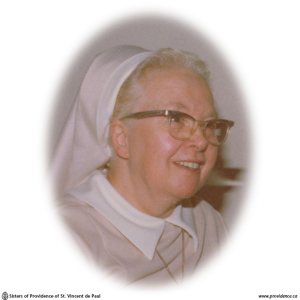 Sarah Margaret Whalen, affectionately called “Sadie”, was born June 10, 1905, in Hungerford Township, Hastings County. She was the fourth youngest of the fourteen children born to William Whalen and Sarah McGrath. The farm home of the Whalen family was a modest one and, with everyone sharing the work of tending the fields and the cattle, the family was able to live comfortably. Religion was an important part of the Whalens’ life with the family rosary being said each evening and catechism classes attended on Saturdays. In the district’s one-room public school, the children took their studies from Grade 1 to 8. Since nearly all the students in the school were Catholic, the Protestant teacher “heard their catechism” daily.

Sadie was a fun-loving child, with an eye for adventure. Often she would return from a day’s play with her clothing somewhat the worse for wear. In the evening she was always part of the happy times the family enjoyed with music and dancing.

As the older children completed their elementary education some left home to board in locations near high schools. One of these, Annie, the fifth oldest, resided with the Kinlin family in Tweed, while attending classes at the Tweed High School. When she was fifteen years old, Annie, along with two of the Kinlin girls entered the Sisters of Charity of the House of Providence at Kingston. The year was 1912. This religious community was known to the Whalen children for their father was accustomed to drive the Sisters from farm to farm in the Tweed area when they came on their annual collecting tour.

The years 1913 and 1917, unlike the previous ones, were sad years in the Whalen homestead. In April of the former year, “after being sick off and on”, Mrs. Whalen died at the early age of 42. In the latter year, her husband, grieving for his wife, died “of a broken heart”. He was only 52. The oldest girl, Margaret Ellen (Nellie) had to take charge of the younger children still at home. Among these was Sadie, then but twelve years of age.

Nellie proved to be an able head of the family and the education of the younger children was not interrupted. By the time she was fifteen Sadie and her sister, Millicent, were boarding in Kingston while studying at the convent school operated by the Congregation of Notre Dame. Inspired by her teachers and the example of her own sister, Annie (our Sister Mary Rose) Sadie determined to become a religious. At first she considered applying to the Congregation, but then decided to respond to her sister Annie’s urging and offer herself to the community of Providence. In her letter of August 22, 1921, she said, “I am very desirous to devote my life to the service of God.” Her application was accepted and in the remaining years of her life she was to fulfill her desire.

After a Novitiate which she describes as; “the happiest year of my life”, Sister Mary Clarissa, as Sadie was now called, spent two more very pleasant years at Maryvale Abbey, Glen Nevis. During these early years in religion she had been gradually completing enough high school subjects to enable her, in 1924, to go to Normal School.

This year of teacher training over, she began a most fruitful apostolate in the classroom. From 1925-1970 Sister taught the primary grades in schools of Eastern Ontario. Students from Brockville, Lancaster, Glen Nevis, Newmarket, Smiths Falls, Picton and St. Joseph’s, Belleville, all have fond memories of her. Parents were pleased to have their children in her care. In Picton alone she prepared over five hundred First Communicants and trained many altar boys.

During these most active years of her life, Sister – like all good teachers – continually sought to improve her own qualifications. While in the Diocese of Alexandria, she studied French and learned to speak this second language quite well. In the 1930’s she successfully completed several upper school subjects. In the 1940’s, pursuing love of music, she obtained First Class Honours in Music Theory from the Royal Conservatory and received her certificate to teach vocal music in schools. In the 1950’s her studies centered on Primary Methods, especially reading and art, and by 1962 she had standing as a Supervisor in Primary Education. In the same year she took advantage of the music studio in the Picton Convent where she was living and learned the rudiments of piano playing. All of this knowledge and skill she used to help her student to a richer education.

After she retired from teaching in 1970, Sister Mary Clarissa spent one year as Directress of Boarders at Rosary Hall, Toronto, and when it was closed, she was appointed Superior at St. John’s Convent, Perth. Except for a mild coronary attack in 1972 her health had been good and she kept herself busy caring for the large convent and its Sisters, receiving their guests and teaching Sunday catechism classes at the school. As she noted in one of her retreat books, she understood that “retirement is not a long vacation”.

Having completed two terms as Superior in Perth, Sister was posted in 1977 to Gananoque. There she took up with renewed vigor her interest in senior citizens and shut-ins. Soon she became a well-known and much loved figure in the town. Her activities not only assisted others, but also helped her to keep herself young. She at last had time to follow-up her interest in art and for a few months she took lessons in painting.

When Sister Mary Clarissa came to the Motherhouse for retreat in the spring of 1985, those who had not seen her for a while were stunned by the change. Her step was slow and uncertain and she lacked her usual vitality. Soon after she was hospitalized with two aneurisms. It was an affliction from which she would not recover. With the practicality and good cheer typical of her, she did her best to greet any visitors including the Sisters from her convent home in Gananoque, the Superior General, Sister Muriel Gallagher, and her own sister, Sister Mary Rose. As she lay dying she promised “to put in a good word for all”.

Sister Mary Clarissa came into the full vision of the Lord whom she had so often adored in the Blessed Sacrament on June 9, 1985, the feast of Corpus Christi, and just in time to spend her 80th birthday in heaven.

Monsignor Peter Kinlin was the main celebrant for the funeral Mass for Sister in the Motherhouse chapel on June 11. Concelebrants were reverend T. Raby, Reverend F. O’Neill, Reverend J. Rozon, Reverend B. O’Neill, Reverend P. McAvoy and Reverend L. Byrne. In his homily Reverend Frank O’Neill referred to Sister’s gentle, gracious and kind spirit – her embodiment of the beatitudes. During the Mass Reverend P. Hamilton, Reverend R. Whalen and Mr. Brian Lucy sang, as well as the Heathfield choir. Reverend R. Whalen’s rendition of the Libera was particularly touching as Sister Mary Clarissa had studied Gregorian Chant and passed on to many students an appreciation of the soul-stirring rise and fall of phrases in this ancient musical form. Sister was buried in the Community plot of St. Mary’s Cemetery, Kingston.

What legacy has this good woman left us, the members of her religious Community? As has been noted, she was from her childhood a cheerful, down-to-earth person. Snapshots of her taken in the 1980’s show a happy woman, intent on living. She once said, “I believe I am the happiest one in the Community.” If anything funny happened, she would laugh so heartily that tears would come and she would need some time to recover her composure. She was an expert at laughing at herself. From her childhood her hair had been almost white and in her older years her cheeks were often rosy. This colouring suited her jovial disposition and friendly manner.

Sister Mary Clarissa’s light-hearted nature was complimented by a spirituality that was simple and straightforward. In her 1979 notes are found the words, “A day at a time. Face it with trust, generosity and joy. Never give up.” This statement is followed immediately by a schedule for the day in which she shows the usual times of prayer for a Sister of Providence, and also a Holy Hour from 9 – 10 a.m. Her prayer life – especially prayer before the Blessed Sacrament—was the great source of strength by which she lived happily and virtuously. Any troubles or worries that she had and all intentions recommended to her she took to her spouse in the tabernacle. There is not sign that she was granted any extraordinary graces of prayer. She used the methods and means we all know. She mentions, now and again, that she had fallen asleep at her meditation. Never putting herself forward, never aspiring to great things, Sister took delight in doing small tasks well, such as arranging a bouquet or fixing a meal. In her letters to family and friends there is a concern for their daily lives and commonplace events, but also a true interest in the welfare of their souls. After her death, notes of condolence received speak of her as “a true gift, one always in our hearts” and “a good influence on our lives”.

The unusually large number of Masses arranged by individual Sisters for the repose of her soul reveal that Sister Mary Clarissa was a much loved member of our Community. Obviously she had given to many Sisters, in her simple and cheerful way, the “mutual support, loyalty, trust, kindness and loving concern” that our constitutions call for. She had taken to heart her responsibility “to share in the total well-being of each of her Sisters”. She modeled for us the virtues of humility, simplicity and charity. We are the richer for her example.

MAY SHE REST IN PEACE. AMEN