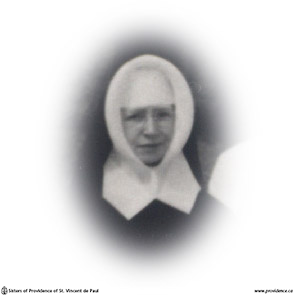 Sister Mary Claude (Winnifred Agnes Kearney) was born on Waupoos Island, Prince Edward County, the youngest of a family of ten, of Michael Kearney and Eleanor Casey.  Her primary education was obtained in local schools and the first years of high school at Picton Collegiate Institute. When her family moved to Toronto, she completed her secondary education at Sr. Joseph’s Academy and took her professional teacher training at College of Education, Toronto University.

For some years she taught with the Sisters of St. Joseph in their high school, at the same time helping her sister, Alice, to care for their invalid mother, who was by this time a widow. After her mother’s death, she felt free to answer the call she had been hearing from early youth to leave all and follow Christ. Family tradition pointed to the Congregation of the Sisters of Providence as the field where she could use her talents and training to serve God and the church. Two of her aunts – Sister Mary Beatrice Casey and Sister Mary of the Presentation Kearney – had been among the earliest vocations to the Congregation and two of her sisters were by now valued members – Sisters M. Carmelita and M. Flavian.

So on September 15, 1933, Winnifred came to the newly-opened Novitiate at Heathfield. On August 15, 1935, she made Profession as Sister Mary Claude, and immediately resumed her apostolate of teaching. For twenty-two years she devoted herself zealously to the instruction of youth in the senior grades of the elementary schools in Kingston, Newmarket and Perth, and in the high schools of Trenton, Maryvale Abbey – Glen Nevis, and Belleville.

In 1957 her health failed and she was obliged to retire to the Infirmary at the Motherhouse. For a few years she was able to do light duties, answering the door and telephone, or coaching young sisters in their studies; but eventually a heavy stroke rendered her a helpless invalid for years. She was marvelously patient and uncomplaining and had the great privilege of being visited daily by her now aged sister, Sister Mary Flavian.

In the last weeks of April, 1977, it was evident that her death was fast approaching.  During one of the annual retreats conducted that month, many Sister retreatants as well as the sisters of the Motherhouse spent much time in her room, and Sister Mary Flavian left only for Mass, meals and sleep; so that prayers were being offered almost continuously for her. On the last night of her life Sister Mary Denise remained with Sister from 8:00 p.m. until 2:00 a.m., when Sister Monica Laton took over the vigil. Then Our Blessed Lady came for Sister Mary Claude in the early hours (5 a.m.) of May 1st – her own lovely month.

Sister M. Flavian, now in her 91st year and the sole survivor of the family of ten, was able to assist at the Funeral Mass celebrated by His Grace, Archbishop Wilhelm, and to accompany Sister’s remains to St. Mary’s Cemetery. Also present for the Funeral were a niece – Mrs. Nona Lynch of Toronto – and cousins, Mr. And Mrs. Desmond Hensman.

Sister Mary Claude will be remembered for her generous service in the schools of the diocese and her patient endurance of a long illness.