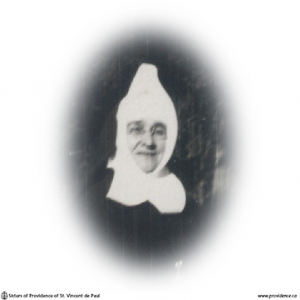 Sister Mary Claudia died at St. Vincent de Paul Hospital, Brockville on Sunday morning, Jan. 21st, 1951 after a short illness. She was stricken by a heart attack while in the wash room where she was found in dearth.

The former Margaret Coyle, she was born on Wolfe Island and with her sister, Sister M. Bertille who died in 1922, she entered the Novitiate in 1913, from Rochester, N.Y. where the family then resided.

After her profession, she spent the first few years at the House of Providence and St. Mary’s of the Lake Orphanage. Sister was then transferred to St. Vincent de Paul Hospital, Brockville, where she spent the rest of her religious life.

She suffered from a rheumatic condition of the knee, which it was believed she contracted working in the laundry at the Lake. After a few years at St. Vincent’s her knee became gradually worse and prevented her from taking part in active duties. She was confined mostly to her room and although she was not expected to do so, she always managed to take care of her bedroom, linens, etc., and tried to avoid being a burden to anyone. Her meals were served from the Sisters’ kitchen, but she washed and took care of the dishes and tray she used, so that she was very little trouble and demanded no special care to the last.

From there she moved downstairs to the little room near the Chapel she was very happy because she could satisfy her longing to visit the Blessed Sacrament and assist at daily Mass. Sister was a familiar figure there in the early morning for many years and was always to be found in her chair near the altar where she could conveniently receive Holy Communion.

Her bright sunny smile and cheerful disposition which made everyone welcome, will be missed at St. Vincent’s. She lived in close union with God and must be glad to welcome the hour when He called her home.

One brother survives, James of Rochester, who attended the funeral. The late Rev. Father Coyle of Picton was a cousin of our dear deceased Sister. May her soul find rest and peace.