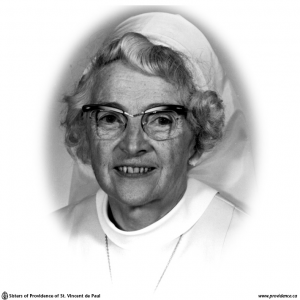 Mary Isidora Consitt was born on April 28, 1915 on the homestead of Clifton Farm located on the Scotch Line just south of Perth, Ontario. Her father, George Frederick Consitt was the great grandson of the original settler who came from England and her mother, Sarah Ann Hogan, was the daughter of Irish settlers to the same vicinity. Both parents belonged to families of courage and staunch Catholic faith. Mr. and Mrs. Consitt had five children, two of whom died in infancy. Mary Isadora was the only girl.

Mary’s pre-school years were happy and carefree. One of her most joyful memories was of the time her dear mother returned from Smiths Falls hospital having recovered from the life-threatening flu, which had confined her there for several months. At the age of six, Mary began her elementary education in the public one-room rural school, a mile from her home. She walked there every day carrying her lunch bag and books. Before her first Holy Communion, she attended classes in the Catholic separate school for three days of preparation by the Sisters of Providence.

Mary graduated from high school during the depression of the thirties. Since her older brothers were studying away from home, Mary decided to help her parents on the farm. She raised poultry to make a little money for herself. This experience proved to be a fruitful investment for future years. After three years, her brother John secured good employment and the way was paved for Mary to attend Normal School in Ottawa. During this time she boarded at the Notre Dame convent in the vicinity. Mary was grateful for the opportunity to attend daily Mass while staying with the Sisters.

Upon graduation Mary began to teach in a small rural school just nine miles from her home. Her salary for teaching grades one to eight was $500.00 a year. Soon, Mary purchased a second-hand car. After five years she accepted a position in St. John’s Separate School replacing the primary grade Sister who had become ill.

In 1943, Mary decided to enter the Novitiate of the Sisters of Providence in Kingston. She found leaving her loving family very hard but was consoled by the fact that the day she entered was September 15, the Feast of Our Mother of Sorrows, a devotion already dear to her heart. Within a week, Mary was sent to teach in St. Mary’s School, Kingston. Mary was blessed with good health during her canonical year at Heathfield, and then was sent to Providence Manor to live during the week, but had to return to Heathfield on weekends. She was among the first group of novices who were allowed to take a little summer vacation at a cottage on Howe Island.

On August 15, the Feast of Mary’s Assumption, Mary pronounced her vows taking the name of Clement, a name she was to live up to during her long and fruitful life. Immediately, Sister was sent to teach in Smiths Falls for six happy years. However, during this time her dear father died. Her mother passed away a few years later. Sister’s teaching career spanned nearly thirty years and besides Smith Falls and Kingston, included appointments to Gananoque, Batawa, Belleville, King City and Brantford. As well as teaching the elementary grades Sister also taught at the high school level. In Brantford she had the joy of seeing the new convent built and of choosing her own bedroom colour scheme. She chose yellow and mauve.

During the summer months, Sister took courses in the United States that led to her Masters Degree in Theology. After a long teaching career she became Mistress of Novices for six years, and then was the administrator of St. Joseph’s Vocational School in Winnipeg. This assignment was followed by a term in McKinley Centre, a group home for developmentally challenged adult women located at Heathfield. During her lifetime, Sister Mary Clement served as local superior at Prescott, Tweed and Providence Motherhouse.

In her later years, Sister served in the pastoral care field and as a parish visitor, where all who met her appreciated her compassionate heart. She made a point of attending the wake and funeral of every deceased parishioner as she felt this practice meant a great deal to the bereaved relatives. Wherever Sister lived she was active in the parish liturgy, in the C.W. L. and the Legion of Mary.

Sister Mary Clement was often heard to say in any difficult situation, “Something good will come out of it.” She also believed that all expressions of love and concern for others lightened the load and made life worth living. It was her hope and daily prayer that the evening of her life would be spent in thanks giving for the many blessings God gave her throughout the years. Her last few years were spent in the Motherhouse Infirmary, where although suffering from Alzheimer’s disease, she enjoyed walking up and down the halls to visit everyone on the floor. She never lost her gift of hospitality and so enjoyed everyone who came to visit her.

With seven Sisters of Providence by her bedside, Sister Mary Clement died peacefully, on June 29, 2001 at Providence Motherhouse, Kingston. Many beautiful memories of Sister’s life and influence were shared at the Vigil Service held on July 2, 2001. The Mass of Christian Burial, celebrated by Archbishop Spence, accompanied by several members of the local clergy, was held in the Chapel of Mary Mother of Compassion, Providence Motherhouse on Tuesday, July 3. Also in attendance were friends and members of Sister’s family, and of her congregation. In his homily Father Gerald Scanlon remarked upon Sister’s kindness, gentleness and humility. He invited all present to rejoice and to thank God for the graces given to Sister throughout her long life, one whose example we could all strive to follow.