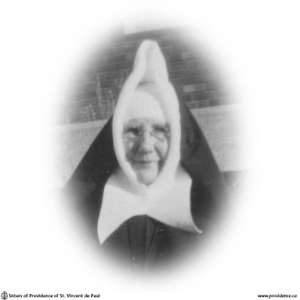 The death of Reverend Mother Mary Clement, Superior General of the Sisters of Charity, Kingston, came not only as a shock, but as a profound sorrow to her Sisters in Religion, and to the large number of others who came within the happy radius of her influence.

Reverend Mother had been in excellent health until four days prior to her death. While working at the orphanage to which she had devoted a great deal of her time during the past year, she was suddenly stricken with the illness which terminated so fatally. Dr. Charles E. O’Connor was summoned and later Dr. Phelan. All that medical skill could devise for her recovery was unavailing. God had issued the irrevocable decrees; her work was finished. At 1:30 Monday morning, July 14th, 1930 surrounded by her sorrowing Sisters, her holy soul burst forth its tenement of clay to enter into the reward promised to those who forsake all to follow the Divine Master.

Reverend Mother Mary Clement (Catherine O’Shea) was born on May 4, 1856. From her earliest years she manifested those beautiful qualities of mind and heart, which, as she advanced in years gave luster to her life.

It has been told to us that one evening she was praying in her room at her farm home and it seemed to her our Lady asked her to give her life to God. Mother who was limited in formal education and actually rather startled at this strange urge which came over her, thought, “I wouldn’t have the least idea how to go about this or what I should do.”. Then our Lady told her “Go to the dresser drawer in the spare room and you will find directions.” So young Catherine O’Shea went down stairs to their spare room and opened the dresser drawer. There she discovered a couple of bags which had been left by the Sisters of Providence when on their annual collecting trip to Sheatown. Mrs. O’Shea had washed, folded, and put a sign on these bags saying that they belonged to the Sisters at the House of Providence, Kingston, Ontario and were to be given to the Sisters when they returned the next year. Immediately the young lady wrote to the Superior General and within a short time she was accepted as a Postulant. On October, 1885 she entered at Kingston the Religious Community where she was destined by God to perform great deeds. Mother used to say when she would hear Sisters telling how they were inspired to dedicate their lives, that God made use of a much more humble way of getting her where He wanted her.

Within a few weeks after her admission the first great sacrifice was made with her characteristic generosity. Her dear mother died suddenly and she was unable to return home to view her earthly remains.

Being an only girl this posed a problem for the family, in particular for her father and a brother who remained on the farm. Some were of the opinion that Mother should return home and take her mother’s place, but she awaited some further sign that such would be God’s will. They had a succession of housekeepers but the women found it too lonely and they departed shortly after they arrived. However, there was one gleam of hope and Mother Clement was never one to discount the possibility of providential intervention. A young lady in the neighborhood had caught the eye of young Mr. O’Shea. Within a few months they were married and the difficulty was solved. Mr. O’Shea, senior, seemed a bit diffident of such good fortune and he wrote to Mother Clement, “She is such a gook cook and such a fine housekeeper, I wonder if she will stay?”

The Community soon realized that Sister Mary Clement was endowed with extraordinary ability and throughout the forty-five years of her Religious life, she filled many onerous offices of responsibility. For three years she guided the destinies of the Novices who will never forget the lessons of virtue indelibly impressed both by word and example. For 17 years she was Superior of St. Vincent de Paul Vincent de Paul Hospital, Brockville, where she had hosts of friends. During the following three years she held a similar position at Rosary Hall, Edmonton. At the General chapter held in July, 1918, Mother Mary Clement was chosen Superior General of the Order. At the expiration of the Canonical term she became Assistant-General. In 1927 she was again elected Superior General, which position she held until the time of her death. Under her regime the Institution has flourished and many new foundations are monuments to Mother Mary Clement’s zeal.

In a religious order where faith is the common heritage of all, Mother Clement’s faith and confidence shone resplendently. She saw God with almost the clearness of actual vision in all the difficulties of life, and with eyes fixed unerringly on the goal, she served Him without compromise.

Owing to her remarkable executive ability her achievements were great, but still greater, was her Christ-like humility, which led her to attribute all success and glory to God. In Saint Joseph she always found a faithful friend, particularly in times of great financial strain. She availed herself of every opportunity to spread devotion to this great Saint.

Mother told many stories about how she handled the various sturdy characters she had among her Sisters, all with due regard to their individual quirks. One amusing story was about the late Mother of the Cross then in charge of the surgical department and Dr. Cornell who had only minor regard for any other who might clutter up the area. One day the late Mother Mary Eulalia was sent with a message to the operating room. She was very stately and her important mien occasionally interrupted the calmness of Mother of the Cross. This day the delivery of the message caused confusion to reign. Doctor Cornell entered into the discussion on the side of his faithful head nurse, Mother of the Cross. This added energy to Mother Eulalia and the tension was high and left in mid-air. Mother Clement hearing the difficulty from each Sister said there was only one way to settle the matter and that was for Sister Mary Eulalia to apologize to Mother of the Cross. This took a lot of persuading but grace predominated. During the afternoon Mother of the Cross was most fervently saying her prayers in the chapel when Sister Mary Eulalia came into the pew behind her and said, “I wish I hadn’t said anything, I never will again and I am sorry,” all this in a loud tone of voice much to the consternation of the other devout worshippers. Mother of the Cross, in an equally loud tone, replied, “Alright, you apologized and I accept it.” Mother Clement said the incident was recreation talk that evening and everyone was in good spirits including the offenders.

Mother Clement’s phenomenal farsightedness in espousing the liturgical movement, so far in advance other participants at the time, is illustrated by the following account related by Sister Mary Hildegarde.

Through the efforts of the St. Gregory Society of America, much interest was aroused in the study of the Motu Proprio, encyclical of the saintly Pope St. Pius X on Gregorian music. Mother Mary Clement arranged an interview with the president of this society, Reverend Father J. Petter, professor of Sacred Chant at St. Bernard’s Seminary, Rochester, N.Y. From there on, Mother Clement was a fervent advocate of the active interpretation of this great encyclical.

All the Sisters were given permission to get missals, the Mass, which was the centre of her life, must be understood better and everything pertaining to the worship of God must be re-vitalized and brought into lie with the thinking of the church. Despite the demand on her meager finances, Mother immediately contacted the Pius X School of Liturgical Music in New York and arranged for a series of summer schools for the Sisters. Special teachers from this school, founded by Justine Ward in collaboration with Mother Georgia Stevens, R.S.H., came to Kingston. The Sisters were summoned from the various missions to study the Ward method of teaching singing in the schools and the Solesmes interpretation of the Gregorian chant. Year after year these great teachers came. Soon our Sisters in the Novitiate and other choirs were singing the praises of God in this most beautiful of all sacred music, Gregorian Chant. The prayer life of the Sisters was enriched by this study of the liturgy. And how spontaneously Mother reacted to the beautiful new type of vestments, dialogue Mass, and all the liturgical surround of our church ceremonies. “Make your lives Christocentric” Mother would say, and undoubtedly, the Sisters of Providence were pioneers in inaugurating Gregorian Chant and the dialogue Mass in the diocese.

It is neither the exaggeration of affection nor a post-mortem eulogy to say that Mother Mary Clement’s beautiful personality was enhanced by many rare virtues which she possessed in an eminent degree. No one realized more fully than she, the purpose of St. Vincent de Paul in founding the Sisters of Charity, namely, the care of the poor, the sick and the orphans. Consequently, heartfelt sympathy and boundless charity for Christ’s poor and suffering were among her outstanding characteristics. For one and all she had the heart of a tender mother, ever solicitous for their spiritual and temporal welfare. Very recently, and for the first time in the history of the Institute, at the instigation of Mother Mary Clement, a spiritual retreat of three days was conducted for the aged of the House of Providence by Reverend A.J. Kelly, C.Ss.R. The devotion manifested by these old people proved convincingly the depth of their appreciation of this privilege.

The hallowed memory of a holy Religious who has served God as did Mother Mary Clement for forty-five years needs no touching panegyric, no high-sounding eulogy. To do so would be to try “to paint the lily, to gild refined gold.” In the silence of the grave her sacred remains will await the General Resurrection. No trumpet-tone of fame will sound her deeds in the ears of the listening multitudes, no historian will pass on to future generations the story of her great life, yet the record of “true greatness”, the sequence of innumerable acts of virtue, is recorded in letters of gold in the Book of Eternal Life. Already she has heard Christ’s words of welcome, “Come ye blessed of My Father.” The odour of her virtues will be ever cherished as a precious legacy by her bereaved Sisters to whom they will serve as a daily inspiration. How applicable to Reverend Mother Clement are the following words:

“Who can tell the deeds of goodness

That right hand from left concealed

Not until Time’s veil is lifted

Will the number stand revealed.”

The funeral took place Wednesday morning, July 16th, at nine o’clock. Solemn Requiem Mass was celebrated by Very Reverend Msgr. Nicholson, V.G., assisted by Reverend P.J. Keaney as deacon, and Reverend L.E. Staley, sub-deacon, with Reverend G.T. Martin, Master of Ceremonies. The spacious church of Our Mother of Sorrows was crowded with friends from the city and elsewhere.

A large cortege conveyed the remains to St. Mary’s Cemetery, where all that was mortal of the late lamented Mother Superior was consigned to Mother Earth.

May she rest in peace and may her abode be in holy Sion. May her beautiful soul now enjoy the Beatific Vision!