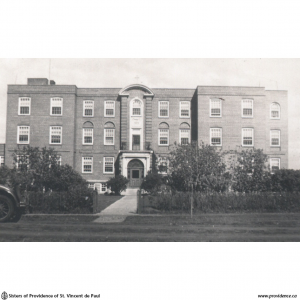 Sister was not in her usual health for some weeks, and being advised by her physician to submit to an operation, she did so. The results seemed to be beneficial and she was apparently improving when she suffered a heart attack which she did not recover.

After profession, Sister M. Cleophas spent a few years at the Mother House, and then went to Chesterville and Glen Nevis. In 1920 she went to the West. Here was ample scope for her activity and zeal. The missions of Moose Jaw, Daysland, Camrose and Edmonton, testify to her worth. The highest or lowest offices were equal with her. As Superior or organist, or as Supervisor of the kitchen, garden, laundry, etc., the faithful service of the Master was her only aim.

She was appointed delegate to the General Chapter, and elected to the office of General Treasurer in July 1936. Unfortunately for the Community she was summoned by death before her first year of office had expired.