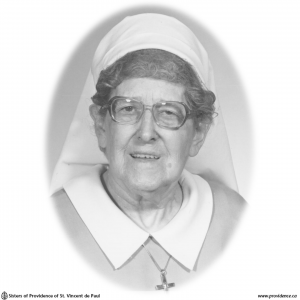 Eva Vincent was born in Sweetsburg, Quebec on March 28, 1898. She was the sixth child in a family of nine. Her parents were Alfred Vincent and Rose Delima Landreville, both of whom were born in Quebec but moved to Gananoque, Ontario when Eva was a child. Eva grew up in a very faith-filled family. Two of her sisters preceded her in entering religious life, one as a Sister of Providence of Montreal and one as a Religious of the Immaculate Conception. The latter, Ida (Sister Mathias), was a missionary in China where she died in a concentration camp.

As a young career woman Eva became a milliner and was known for the beautiful hats which she made. Then in 1921, at the age of 23, Eva wrote to Mother Clement requesting entrance into the Novitiate of the Sisters of Providence, Kingston, ON. Her pastor, in his letter of recommendation remarked that Eva had always been an exemplary Catholic and assured Mother Clement that the congregation was getting a good subject. In her letter requesting to receive the holy habit, Eva wrote that she was very happy and contented, and that she felt certain that she was where God wanted her to be.

On Tuesday, September 4, 1923, Emelia made her first profession, taking the name of Sister Mary Cletus. She was favoured on this happy occasion by the presence of her Aunt and two Sisters, religious from Montreal: Sister M. St. Joseph, St. John of God, Longue Pointe; Sister Gretian, Providence Asylum and Sister Mathias of the Immaculate Conception, Outremont. After her profession, Sister was missioned to care for children, and to general housekeeping duties in several congregational homes and institutions both in the West and in the East.

In 1951 Sister was missioned to the House of Providence (Providence Manor) Kingston, where she remained for the next twenty-eight years. Her responsibilities included night duty and care of the elderly. She also enjoyed working in the craft shop and contributed many items to it. In 1979 Sister retired to the Motherhouse where she continued to be active and to help with light duties in the dining room until failing health forced her to move to Marian II floor. Until her eyesight failed, Sister Mary Cletus was a great reader. Even then, she managed to keep up with current affairs by listening to the news on her radio or by having friends, especially Sister Mary Fitzpatrick, read to her. Sister had a beautiful spirit of prayer and liked to attend communal prayer gathers for a long as she was able.

Sister Mary Cletus always maintained and nourished relationship with her many nieces and nephews. They visited her frequently and each time they came to a new mission where she was living she took great delight and pride in giving them a grand tour of the facility. One of her nieces remarked at Sister’s vigil service that she always had to remember to wear good walking shoes whenever she went to visit her aunt at Providence Manor, which she so affectionately called The Prov. Sister Mary Cletus also nourished close friendships outside of her family. A letter from one family written on the occasion of Sister’s Golden Jubilee in 1981 thanked her for being a true blessing in the life of the family. The writer went on to say that her six children were helped to not be afraid of Sisters in their habits because Sister Mary Cletus was the first Sister to smile and speak to them. Sister set a tremendous example of love that many adults and children needed to see, and did see in her own precious way of relating to them.

Sister Mary Cletus died on July 26, 1995, in the 74th year of her religious life. Her niece, Agnes Cadue, and two grand nieces kept vigil at her bedside and were with her when she died. At the vigil service tribute was paid to Sister’s spirit of dedication, hospitality and compassion, as well as her apostolate of prayer and telephone ministry as long as she was able. Sister Mary Cletus will be remembered by her Sisters, relatives and friends for the great love she showed toward the sick and elderly within and beyond the institutions operated by the Congregation.

Archbishop Francis J. Spence, accompanied by Father J. Rozon and Father C.H. Gazeley presided at the Funeral Liturgy in the Chapel of Mary, Mother of Compassion, Providence Motherhouse, on July 28, 1995. In his homily Archbishop Spence made special mention of the fact that Sister Mary Cletus spent so many years on night duty at Providence Manor. It takes a special kind of person to do night duty for a prolonged period of time. Many of Sister’s nieces and nephews took part in the funeral liturgy and joined in the celebration of her life.