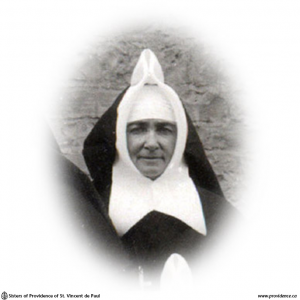 Sister Mary Clotilda, Margaret Mary Brady, died at the Marian Infirmary on September 25th, after an illness of over ten years. Born at Brewers Mills, the daughter of Charles Brady and Mary Mangan, she entered the Novitiate in 1909. In 1912 she made her Religious Profession. After Profession her first appointment was to Smiths Falls.

A graduate of Ann Arbor Hospital, Michigan, it was to be expected that nursing and hospital work would occupy most of her future religious life. In 1918 she was sent to the West, and the hospitals which benefited by her kind and capable management include St. Mary’s Hospital, Camrose, Providence Hospital, Moose Jaw, and St. Joseph’s Hospital, Edmonton. St. Mary’s Hospital, Camrose, where Sister spent many years in charge, owes much of its success as a flourishing institution to her endeavors in its early years.

Sister M. Clotilda was a capable administrator, a kind Superior and most of all a faithful religious. Her illness was a great trial to her. Of a very sensitive nature she felt her condition keenly as she found herself becoming more forgetful and confused. This caused her painful embarrassment until finally she got quite senile and irresponsible.

Always prayerful, it was not usual to hear her frequently repeating indulgenced aspirations especially in the beginning of her illness, and she would never tire of answering the Rosary and joining in the prayers until she became too weak towards the end. Her agony was slow; for days she just slept away, and died without any apparent suffering.

Sister belonged to a family who gave several members to religion; among these were three aunts, namely Sister M. Angel Guardian, Sister M. of the Rosary and Sister M. Teresa who died several years ago. There are also several nieces and nephews in different religious orders.

In the absence of His Grace, the Funeral Mass was offered by our Chaplain, Rev. Father Flurey, assisted by the clergy from St. Mary’s Cathedral. Burial took place in St. Mary’s cemetery on Thursday. The prayers at the grave were conducted by Father Flurey. R.I.P.